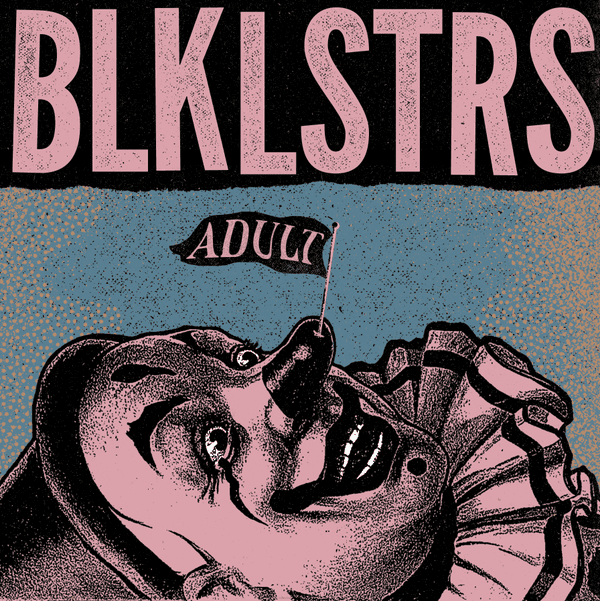 The Leeds-based label had a good run, and a few alumni have since gone on to better things. Even though bands like Humanfly, Castrovalva, Holy State and I Concur have since gone by the wayside, the likes of Hawk Eyes, Nine Black Alps and Blacklisters have enjoyed creative resurgences as of late. The latter, an uncompromising noise rock quartet, have signed to the similarly in-form Belfast label Smalltown America, whose roster isn't exactly lacking for quality riffs at present. They join USA Nails, Carnivores and Negative Pegasus (among others), currently leading the charge for those who like it loud. Their second album 'Adult' follows on from their 2012 self-titled debut (recently repressed by STA if you were having trouble seeking it out), and is, quite simply, a savage, snarling beast of a record.

The decipherable lyric count is negligible; you can just about hear frontman Billy Mason-Wood declare, on opener 'Shirts', "I'm not fucking around, I wear my heart upon my sleeve." What they lack in intelligible lyrics, however, they make up for with some more hilarious song titles. The debut featured 'Clubfoot by Kasabian', 'OK47' and 'I Can Confirm Ruth Abigail Holmes is Not Dead and is Planning to Make a Movie About Her Life'; 'Adult' one-ups that whole record with 'The Sadness of Axl Rose', which is every bit as unhinged as its title suggests.

It's the work of a band who take themselves seriously only when it counts; even if it was trailed by Mason-Wood saying that they "may have written the greatest Phil Collins album of all time" with his tongue lodged so firmly in his cheek he probably needed corrective surgery, they're able to drop the act when it comes to their music and just rock out.

If the album carried on with the intensity of the likes of 'Cash Cow' and 'I Knock Myself Out' for its duration, it'd become an endurance test, but Blacklisters know when to mix things up. While their sound calls to mind some noise-rock luminaries – Fugazi, Shellac, The Birthday Party – 'Adult' is a more considered affair than its predecessor, all over the place in the best possible way.

It's as much math rock as it is noise rock, delightfully unpredictable in places ('Weasel Bastard', 'Power Ballad'; and yes, the latter is the furthest thing from a power ballad you could possibly imagine), precise and purposeful in others. Blacklisters have been around since 2008, and, seven years on, they appear to be hitting their stride. Better late than never, right?