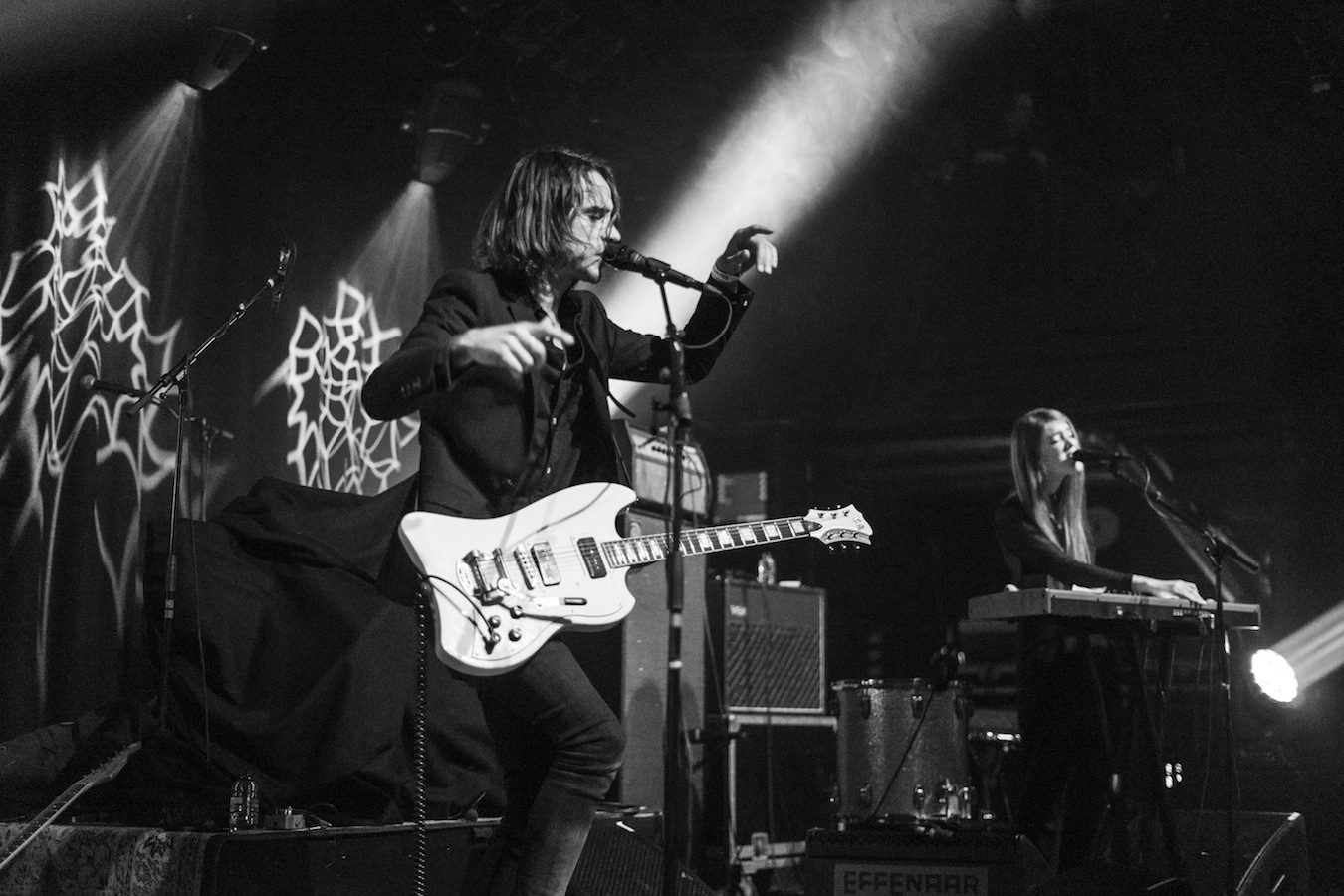 How to describe thirty-six hours of music equal parts glorious and tumultuous has proved a real challenge. It's also taken that long for the ringing in my ears to stop and for the smell of potent pot to be washed from all the clothes I wore over the weekend. No, mum, I didn't smoke any of it.

Fuzz Club's reputation as a purveyor of fine art is richly deserved. As we landed in Eindhoven, I have to admit that I wondered if a procession of their acts and best friends one after another might prove a little bit much or a bit repetitive, all the cliché'd nonsense you might expect a writer to spout who has not spent time watching many of these bands live before.

I knew a couple of things though:

1. It was likely to be loud, and
2. stamina was going to be very necessary indeed, as somewhere in the region of 28 bands took to the stage over the course of the festival's duration.

I want to be honest. I didn't see all of the bands who played over the weekend. In order to do this, I would have needed to stay up till 4am on both evenings. My disability renders this an impossibility. However, the flip side of this is that I am able to report that the access at Effenaar is exceptional and the staff are fantastic at assisting those with limited mobility. Thanks to them. But that's enough waffle-y preamble. You're reading this because you want to know who the best bands of the weekend were. Having seen all are part of sixteen shows over the weekend, here are some particular highlights:

The weekend began with a thunderous performance from Nik Raynes (The Myrrors), a fine start indeed, setting the scene for the festival with a huge sound and oodles of atmosphere. You Said Strange followed, playing groovy, woozy psychedelia to a packed second stage room.

Pretty Lightning entertained with thunderous tom work and majestic beards two highlights of their incendiary set. If you thought bands like Royal Blood had the two-piece thing down, you're sorely mistaken. This is glorious stuff, with another major plus being the use of tambourine and shaker. I know these aren't the main things the band might want me to comment on, but these elements really enhanced my enjoyment!

Elsewhere, Dead Rabbits overcame some vocal tuning issues to put on a great show full of light and shade, Spirit Valley gave an energetic and vibrant performance in which their core sound was augmented beautifully by synths and synth pads. Some of those crescendos.. .My goodness.

Holy Wave gave a mature and muscular performance of driving psych-infused indie featuring some gorgeous vocal harmonies. A new song debuted on the night, 'Adult Ffear' shows that the leaps and bounds the band take with each project show no signs of abating. One of the best bands of the night.

My night ends with Medicine Boy, whose new album 'Lower' is out later on in the year and is a fine piece of work. The two-piece (what is it with all these two-pieces?) put on a jaw-dropping show full of atmosphere which is both ominous and meticulously-crafted. This is a true performance, as the way the two protagonists interact with one another is worth watching on its own, even without the music. Thankfully the songs are great too, with selections from the new album showing a real craft and maturity, a fullness of sound which really bodes well for the future. Their forty-five minute set flies by and is over all-too-soon. Hands down the best band of the night.

At this juncture, the high of having seen such a wonderful band at the height of their powers along with the fact that it was already midnight led me to retire gracefully for the night. There was no way Medicine Boy could be topped, not on this night. Returning refreshed as though a daisy for Saturday's frivolities, the evening began early with the BRMC-esque vibes of The Third Sound, who packed a huge amount in to their short, sharp bursts of adrenaline. Sekel were hugely impressive in showcasing all the best elements of psych music and proving once again that all the best bands really are Scandinavian. The band overcame some technical issues and what appeared to be a fair dose of nerves to deliver a truly joyous set swathed in the ubiquitous fuzz.

New Candys played to a full and partisan room, showcasing songs from their fantastic recent album 'Bleeding Magenta'. These are 90s indie songs (in a very positive sense) precision tooled for playing live. They slay the room. Dead Vibrations produced one of the finest albums of the year, perhaps sadly overlooked because of its release early in the year. Tonight they are imperious. Squalls of feedback, some great solos, a watertight rhythm section, stirring vocals, it's all there. There are very few bands in the world as exciting as them. Seek them out immediately.

Tales of Murder and Dust are next and they have a hard act to follow. Their dark and doom-laden cinematic rock has many in the crowd in raptures. Sonic Jesus are confident, loud and multi- layered, as members past and present join together for a celebratory set laden with treasures. If I were to start a band, I'd want it to sound like this, so many layers, such consistent quality of songwriting, such volume. It's all there. No wonder they have the crowd eating out of the palm of their collective hand.

The Wands reform for a one-night only romp through their hits of yester- year. A really exciting band to watch, full of great tunes, creative melodies and some really delightful guitar work, it's a shame that we may never see them again.

The festival ends for me with the wondrous sight of JuJu. I didn't make many notes in this gig, noting only that what was presented was akin to a 'drone band dance party'. Of course, anyone who has heard their album 'Our Mother Was A Planet' will be far from surprised that the performance was a true high point of the whole event as energy and harmony spilled from the stage at the same propulsive rate as guitar solos and hypnotic bass grooves, really there could be no better headliner for the second stage of this fantastic event than them.

At this point, once again, I retired gracefully. This time it was due to having an early-morning plane to catch, but not before looking back in a somewhat misty-eyed fashion and realising that my expectations had been wildly exceeded for this weekend. Psych and shoegaze are resurgent and, on the evidence of this weekend, it will continue for some time to come.

Fuzz Club cemented its burgeoning reputation as one of the most vibrant and diverse labels in the world and hundreds of bleary-eyed fans departed Eindhoven ecstatic and hungry for more. What more could you want from a festival? A truly great experience which I'm really grateful for and looking forward to repeating as soon as possible.