Shia LeBeouf turned up for the premiere of Nymphomaniac wearing a paper bag over his head (pictured) – as you do – and then walked out of the subsequent press conference after quoting Eric Cantona: “When the seagulls,” he paused, even mimicking Cantona’s slow gulp of water. “When the seagulls follow the trawler, it is because they think sardines will be thrown into the sea.”

Although we can safely assume that neither Cantona nor LeBeouf hold any special scientific insight into the piscivorous behaviour of the seabird, the quote in its original context (Cantona’s misguided sense of persecution) at least made sense. LeBeouf’s reaction followed an entirely pedestrian question that had already been answered by co-star Stacy Martin. Upon his return to Los Angeles, LeBeouf then staged an art show in which he was described as looking as if his cat had just died (link).

Such strange behaviour poses numerous thoughts: chiefly, that I hope Kitteh LeBeouf is alive and well. But what’s Shia up to? A situationist prank? Has he been taking lessons in oddball self-publicity from Uncle Lars? A desperate attempt to separate himself from his Transformers fame? Let’s hope it’s one of the above because a public collapse of his mental health would be a tragedy. The Big Film: Her

Spike Jonze’s Her depicts a near-future Los Angeles in which civilization has evolved to become a digitalised utopia – albeit one tapered by the crushing loneliness of its citizens. As a semi-depressed writer of personalised letters for those unwilling or unable to craft their sentiments for themselves, Theodore (a vulnerable Joaquin Phoenix) appears to be typical of his generation; lovelorn and lost, drifting around a city of disconnected souls. A new highly intelligent operating system (voiced by Scarlett Johansson) reignites his stagnant emotions and sparks a burgeoning relationship between man and artificial intelligence.

It sounds like an awkward conceit to hang an essentially conventional romance around, but Jonze has successfully created a world full of technology just a few leaps from our own while also making this unorthodox partnership feel immediately real. Whereas Where The Wild Things Are failed to deliver much in the way of the joy of innocence in a film aimed at children, Her delivers warmth and wit to what could’ve been a dry and cerebral examination of the human/tech interface. The playfulness of the concept sags a little as the story reaches its conclusion, but Jonze has succeeding in delivering a brilliant satirical iRomance, which provokes discussion as it entertains.

Based upon an idea originated by Nick Frost, Cuban Fury represents his biggest film role to date in which he’s not joined by his old pal Simon Pegg. Thematically, though, this tale of a 30-something who revisits his salsa dancing past in order to impress his otherwise out-of-his-league boss (Rashida Jones, of Parks And Recreation fame) isn’t a major departure.

Frost’s character Bruce reflects his past work as his unlucky everyman embarks upon a long-overdue journey of self-improvement, which is peppered with neat one-liners, larger-than-life sidekicks (Four Lions / Fonejacker man Kayvan Novak almost steals the show as a flamboyant Iranian dancer) and the occasional theatrically physical set piece (in this case, an energised dance-off between Frost and Chris O’Dowd).

So far, so fun? Of course. Yet for the reasonable quota of laughs per minute, it’s closer to Pegg’s Run Fatboy Run – again enjoyable, if not particularly memorable – than the clearly superior Cornetto trilogy. It could be argued that Edgar Wright’s visual flair would’ve given Cuban Fury that elusive elevation to something more, but it’s really the closing act that prevents the film from reaching cult status as it fades without direction towards the closing credits. 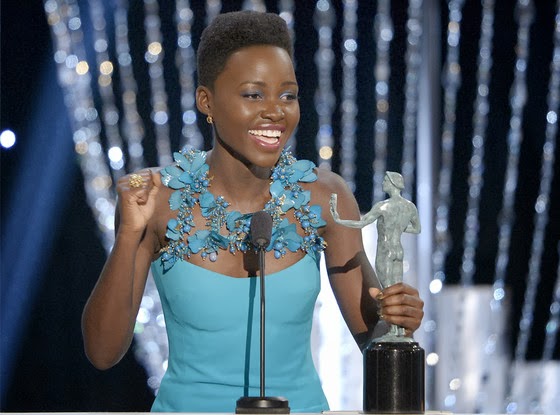 Who? Born in Mexico, raised in Kenya and educated in the USA, Lupita Nyong’o has been nominated for Best Supporting Actress at pretty much every major upcoming award ceremony – including this weekend’s BAFTAs.

What’s she been in? Her only feature film role to date has been as Patsey in 12 Years A Slave. Not a bad start…

What’s coming up? She’ll also be in the Liam Neeson hijacker drama Non-Stop, which is out at the end of the month.

They say: “She’s very, very special. You’ve got to see her performance. It’s her very first film. We were lucky to find her.” Brad Pitt (link)

She says: “I was overwhelmed because there was such a shared, unspoken determination to make this film and it’s clear when you watch it.” (link)

Boyz N The Hood director John Singleton has been confirmed as the man behind the long-awaited Tupac biopic. No word yet on who will be playing the West Coast legend.

WTF news of the week, and I quote: “In a first of its kind partnership, Spider-Man will be the first Super Hero ambassador for Earth Hour, the global movement organized by WWF (World Wide Fund for Nature), with a message to inspire individuals to use their power to become Super Heroes for the planet.”

Family flick Mr Peabody & Sherman pipped RoboCop to the top of last weekend’s box office using nothing more than mild comic violence. Dallas Buyers Club trailed at four and The Invisible Woman lived up to its title at 14, four places behind a live screening of the Met Opera’s production of Rusalka.