British or not, the Gravity of the situation has been clearly felt…

This caused a little controversy because on first glance, Gravity doesn’t appear to be British at all: the visible cast members are both clearly American, director Alfonso Cuarón is Mexican and the setting – space – totally ignores the British thematic touchstones of middle-class eccentricity (stories set in London) or people battling crippling poverty (films set anywhere else).

It doesn’t help, of course, that according to the BFI’s ‘cultural test’ guidelines (link), for a film to qualify as British for reasons of tax relief, Gravity would fall short of the 16 points required. As an evaluation process, such box-ticking in inevitably flawed. Cuarón, for example, has lived in the UK for years and no one quibbled at his nationality when Harry Potter And The Prisoner of Azkaban was hailed as a British success story. Similarly, producer David Heyman is British, as is composer Steven Price, and almost all of the film was shot in Britain.

But what makes Gravity great? It’s sure not the dialogue. The performances are strong, but call for little breadth or depth of character. Ultimately it’s the stunning visual effects, which were headed by Tim Webber at Soho VFX company Framestore. Perhaps it’s not fair that a more obviously British film such as The Selfish Giant is pitched against a $100 million movie. On the other hand, though, the BAFTAs should surely celebrate world-class British talent, in whatever form it may appear.

The Big Film: Nymphomaniac, Volumes 1 and 2

Given Lars von Trier’s often emotionally gruelling filmography, the promise of ground-breaking explicitness and the expectations generated by that title, one could be forgiven for expecting that Nymphomaniac (pictured, main) would be a downbeat tale of sexual degradation.

The final product – covering some five hours over two instalments – is somewhat different. Its carnal vision is confrontational rather than arousing, and, for the most part, it’s a fascinatingly absurd story of a life less ordinary.

After being found comatose in an alley, Joe (played by Charlotte Gainsbourg and Stacy Martin, at different stages of her life) recounts her sexual past to kindly saviour Seligman in a serious of episodic chapters: an awful confrontation with a lover’s family; psychosexual control (alongside a thrillingly different Jamie Bell); extreme teenaged experimentation; and numerous encounters with Shia LaBeouf’s ever-evolving (and often erect) Jerome.

The first part in particular is far breezier than expected. Joe’s actions rarely result in harsh consequences and Seligman’s constant comparisons of her story to everything from classical music to fly-fishing are often surreally amusing. It escalates towards darker territory, but von Trier’s sense of playful provocation is never far away. As an argument for gender equality in sexuality, it’s curious. As a cinematic experience, it’s certainly memorable – especially as Lars fans will note reverberations from Breaking The Waves, The Idiots and The Kingdom.

Also Out: Only Lovers Left Alive 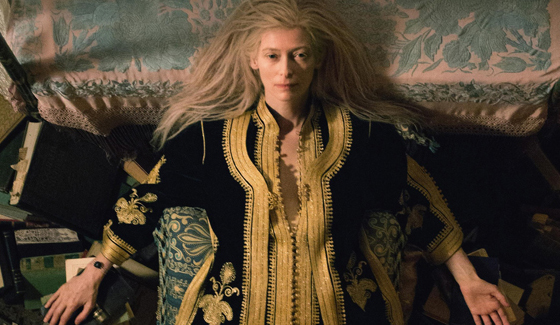 For a director who’s carved a reputation for intimate, oddball dramas throughout the course of his career, a brief excursion into horror may seem an odd fit for cult legend Jim Jarmusch. Things aren’t quite what they seem, of course, and his welcome return to the director’s chair after a five-year break offers vampire folklore a much needed shot in the vein with this brilliantly sardonic tale of two ancient lovers living apart.

Tom Hiddleston and Tilda Swinton make an endearingly downbeat pair as Adam and Eve, the undead couple who, after decades spent living on opposite sides of the globe, decide to reunite for a few days at Adam’s dingy rock star pad in Detroit. However, it isn’t long before the unexpected appearance of Mia Wasikowska, as Eve’s young and irksome sibling Ava, threatens to scupper the duo’s plans for a peaceful reunion.

Bursting with razor-sharp wit, Jarmusch is, as ever, far less interested in genre tropes than he is in astute character development, imbuing his characters with rich pathos and warm believability. With an ensemble cast of effortlessly lovable misfits and their gloomy perception of immortality, this visionary take on a stagnant genre is one the year’s most essential offerings. Words: Paul Weedon

Just a quick mention, too, for The LEGO Movie. Yes, yes – it’s a film based on a children’s toy. But Transformers this, mercifully, is not, the Phil Lord- and Chris Miller-directed animation instead possessing an adults-and-kids-alike appeal that’s far closer to the tenderness of the third Toy Story. It celebrates not simply the product it places on every inch of the picture, but also the very essence of the blocks’ enduring success: that creation is infinite, and possibilities for play are only limited by your imagination. And this movie puts the biggest imagination onto the screen.

It’s funny and charming, with big physical jokes for the youngsters and more subtle, softly spoken moments for parents to get misty-eyed over. Without giving anything away, there’s a transition in the film’s final third – in presentation and tone alike – which will bring a lump to the throat of anyone young at heart. Oh, and it stars the best cinema Batman, ever. Maybe. A little bit magical, then, and a release that shouldn’t be overlooked by those without a child to take along, because there’s a lot more substance to this than its plastic source material might imply. Words: Mike Diver Who? A 17-year-old Californian of Guatemalan descent who has been acting since he was two.

What’s he been in? Revolori has appeared in numerous American TV shows as well as the baseball movie The Perfect Game.

What’s coming up? Next month will see his biggest role to date in Wes Anderson’s excellent The Grand Budapest Hotel. Surrounded by many of Anderson’s regular collaborators, Revolori plays lobby boy Zero whose escapades with Ralph Fiennes’ Gustave are the heart if the movie. (He's the short one, just up there.)

He says: “[Fiennes] was always helping me to be better. He was teaching me, really much like an older brother would – and much like Gustave does to Zero.” (See the interview below)

Turns out that England manager Roy Hodgson is a fan of Werner Herzog’s Fitzcarraldo (link), which is apt as getting England past the second round of the World Cup will be akin to that movie’s tale of attempting to pull a steamboat over a mountain.

The players – to draw on the “footballers aren’t too bright” cliché – are feverishly collating a Blu-ray library featuring all of the Fast And Furious movies, the complete filmography of Michael Bay, Gary Busey’s Quigley, and every Danny Dyer movie that went straight to DVD.

What’s the quickest way to box office riches? The phenomenal revenue generated by The LEGO Movie suggests that pleasing little people at the same time as providing a touch of nostalgia for their parents will do the trick. (It does! See above.) The Monuments Men debuted at #2, followed by Tinker Bell and The Pirate Fairy (#6), Cuban Fury (#7), Endless Love (#8) and Her (#11).

Finally, how would Sir Patrick Stewart react if he was incorrectly “outed” by The Guardian? Well, this week we found out:

Well, @guardian it makes for a nice change…at least I didn't wake up to the internet telling me I was dead again.

Words: Ben Hopkins (except where indicated)