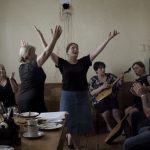 The Sheffield International Documentary Film Festival, or Doc/Fest as it’s widely known, is a welcome highlight on the international calendar of any filmmaker or documentarian and for the vastly growing audience of compelling and crucial non-fiction films.

For six days in June, Sheffield city centre becomes a cosmopolitan heaving hub of activity that celebrates and elevates a palette of film work that is as rich as it is relevant. With swanky boutique, brand spanking multiplex and cosy old favourite cinemas across the city all involved, alongside other venues such as the Crucible Theatre, City Hall and Town Hall – plus free outdoor screens with deckchairs dotted around – the Doc/Fest requires some careful navigation. Thankfully, everything is within walking distance, so every talk, masterclass, screening, live performance, workshop, exhibition networking party or piss-up, is only a quick march away.

For one itinerary-busting week festival-goers are exposed to the latest works of internationally acclaimed veteran filmmakers and vital emerging voices that reflect the world we share. As the CEO and Festival Director Liz McIntyre succinctly puts it, “We’re reeling from seismic change as we witness events that we know will become the most pored over scenes in future documentaries. Doc/Fest 2017 is brimming with documentaries that are funny and quirky, powerful and influential, heart-stopping and heart-breaking”.

The Opening Night film of the 24th edition was the world premiere of Daisy Asquith’s Queerama, coinciding with 50 years since the passing of the Sexual Offences Act, which marked the slow process of the decriminalization of homosexuality in the UK. Given unlimited access to the British Film Institute’s archives, with some material dating back to 1919, Asquith has crafted an eye-opening and entertaining account of gay experiences in the last century.

With a soundtrack by John Grant, Alison Goldfrapp and Hercules & Love Affair the film transports us into the lives of gay men and women throughout the 20th Century. Black and white footage and testimonials from homosexuals in the 1940s and ‘50s offer a rarely seen glimpse into the intensely difficult challenges that society once imposed. The film and its playful editing (staggering given it was accomplished in months rather than years) shines a welcome light on how far society has progressed in the face of ugly prejudice. After the premiere John Grant performed several tracks used in the film and joined Asquith and the prominent creator of contemporary British queer cinema Campbell X for a lively Q&A.

The Talks & Sessions are one of the most popular elements of Doc/Fest and this year the stellar bill continued. Louis Theroux interviewed one of his heroes, Nick Broomfield – the acclaimed filmmaker who during his forty years in the industry has made films such as Biggie and Tupac, Aileen Wuornos: The Selling of a Serial Killer, Kurt & Courtney and the hotly-anticipated Whitney: ‘Can I Be Me which premiered at the Doc/Fest. Broomfield and Theroux made for an infectious duo and after a riveting tour through the elder’s career one City Hall audience member shouted out the suggestion that they should collaborate, which quickly received noisy cheers of concurrence.

The redoubtable and always likeable Ian Hislop was also at City Hall in conversation with the BAFTA-winning actor and satirist Jolyon Rubinstein (The Revolution Will Be Televised, Revolting). The pair were intensely amusing bedfellows and unpicked the world of post-truth and satire, lambasting prime targets like the excruciatingly smug Piers Morgan and the sickeningly repellent Katie Hopkins in their stride whilst presenting the modern media landscape encountered by the long-time editor of Private Eye and the only panel member of Have I Got News For You who has never missed a single episode, even when requiring an urgent operation for appendicitis.

At the Crucible Theatre the legendary director and artist Peter Greenaway CBE, whose work stretches back to the 1960s and includes The Cook, the Thief, His Wife & Her Lover, gave an uncompromising speech in which he slammed the need for writers in filmmaking and called instead for a “painter’s approach” to the art. In a densely-filled hour Greenaway championed non-narrative styles of storytelling and urged for more pioneering forms of artistic approach to respond to the febrile social and political changes at hand.

One of the most enlightening talks came from the explorer, BAFTA-Award winning presenter and skilled documentarian Bruce Parry, who discussed his extraordinary career to date with journalist and presenter Katie Puckrik. The Showroom Cinema hosted a packed session and screened sneak previews of Parry’s latest project – the result of four years of work, pleasure and pain – the new feature length documentary Tawai – A Voice From The Forest (due for release in cinemas this Autumn), in which he returns to reconnect with the tribes from his amazing adventures when making the ‘Tribe’ BBC series. Returning to India, Malaysia and the Amazon and to the Penan tribe of Borneo, Parry discussed the film and how his fascinating documentary work and journeys have brought him to a fully rounded re-evaluation of his views on human nature and how humankind relates to the natural world.

The Marketplace segment of Doc/Fest offered a huge programme of initiatives and pitch opportunities for anyone either already making films or eager to do so. TV stations, Production company’s and content providers such as Channel 4 and The Guardian hosted live pitching sessions where audiences observed the entire process from a candidate’s pitch through to the final decision making and filmmaking prizes. This is another one of the numerous fantastic things about Doc/Fest – it’s such an inclusive and supportive environment. Whether you are simply a keen documentary fan, a fledgling filmmaker or a bonafide legend, there is always something to engage and inspire.

Not least the actual films. A total of 60,856 attendances were enjoyed by everyday cinema-goers and international and UK industry delegates, with a record 250 screenings at 14 screens across the city.

In its first year at Doc/Fest, the Art Doc Award, which has been created to celebrate new forms of storytelling and recognises bold, innovative non-fiction films, was given to ‘City of the Sun’ by first-time filmmaker Rati Oneli (United States, Georgia, Netherlands, Qatar, 2017). The film moves seamlessly between fact and fiction and lays bare the honest realities and ups and downs of four different sets of lives in what remains of a small mining town in Georgia.

The Environmental Award was taken by A River Below (Dir: Mark Grieco, Brazil, 2017), which highlights the alliance between a renowned marine biologist and a reality TV star who are both campaigning to save Brazil’s pink river dolphin, whilst also posing questions about the ethics of activism in the modern media age.

The Tim Hetherington award, given to films and filmmakers that resonate with the late journalist Tim Hetherington’s legacy, was won by Strong Island (Dir: Yance Ford, USA). Through unflinching testimonials and stylish cinematography we bear witness to the grief endured by a family whose son was murdered on Long Island, New York, and the disinterest of the police in bringing to justice the killer of a young black male.

The Grand Jury Award went to City Of Ghosts (Dir: Matthew Heineman, USA). The film centres on the citizen journalist group Raqqa is Being Slaughtered Silently (RBSS) and in a heart-pounding 90 minutes it exposes the unspeakable horrors of life under ISIS rule.

Festival Director Liz McIntyre mentioned that “we strive to increase the visibility and accessibility to documentary story-telling for inspiration” and Doc/Fest does that and much more in extraordinary fashion.

An early bird price of £159 + VAT for a ‘Lightning Pass’ – giving access to all of next year’s films and events – is available HERE.

The 25th edition of Sheffield Doc/Fest will open on Thursday 7 June 2018 and close Tuesday 12 June 2018, with the Annual Awards’ Ceremony and Closing Night Film.