With a straight face so consistent that it’s actually admirable, Vince Staples carries himself like a true stoic; full of wisdom but without any particular interest in sharing it. He is about to enter his 10th year of making music, and will do so as an accomplished, acclaimed and adored artist. But his mission, if he has one, is not to entertain or be revered, but to be comfortable, secure, and making progress.

Vince has always been candid about his life story so far, and as he gears up to release his fourth studio album, ‘The Vince Staples Show’, the mechanics behind his success is clearer now than ever. “I’ve only been trying to make music for as long as I’ve been making music. It was never something that was pre-thought out, it was just something that kind of happened,” he tells Clash, having just rounded off a summer of triumphant festival appearances with a recently announced record deal at Motown, and a new single, ‘So What? (Episode One).’ Born in Compton in 1993, Vince is the youngest of five. His mother moved their family to North Long Beach City in search of better schools and lower crime rates, and took an extra job to send Vince, full of academic promise, to a modest Christian private school. At the end of four years of near stability, forces beyond Vince’s control seemed to take over, and he got kicked out in the 8th grade over a case of mistaken identity. It was an episode that set in motion a series of new schools, unfamiliar environments, and a growing disillusion that even gang involvement couldn’t remedy.

In the traditional hip-hop canon, music presents itself as a guiding light for young men on the wrong path; a means of finding emotional if not financial freedom, a way to express frustrations and strive for something bigger. For Vince, it was a chance encounter in 2010 with Odd Future’s Syd The Kid that brought out his now trademark reluctant flow. As the story goes, Vince’s childhood friend Dijon Samo took him to the studio where Syd and the gang were recording their first demos. Without intent, with no designs to be part of OF, Vince soon found himself rapping unadulterated filth with Earl Sweatshirt, right in the eye of a cultural hurricane. His wry countenance and flair for pointing out life’s absurdities and society’s hypocrisies make him an attractive tonic to a hip-hop industry that primarily seems only interested in dealing with extremes. Everything about him is understated: he lives a straight edge lifestyle, and his dress sense is monochromatic. In interviews his words can be cutting but are always unhurried, optimism hiding behind his witty quips on modern life, his facial expression rarely shifting beyond a tired raise of the eyebrow. But this gift for being the coolest person in any room belies a growing body of work that reflects nothing less than an energetic, enthusiastic, genius.

There are no missteps in his discography. His debut major label project, ‘Summertime ’06’, is a packed double album that expounds - philosophically at times - Staples’ views on the contemporary African American condition, without breaking from his Ramona Park Crip vernacular. The EP that followed in 2016, ‘Prima Donna’, featured collaborations with James Blake, Andre3000 and A$AP Rocky, and was released with a trippy, captivating 10-minute short film that underlines Vince’s attraction to the cinematic and experimental.‘The Big Fish Theory’, Vince’s sophomore album, was a sprawling, collaborative collage of electronic music that pitted the effortless irony in his delivery against eclectic instrumental compositions by the likes of SOP Now, having signed to the nascent Blacksmith Recordings label, an imprint of Motown founded by his mentor and manager Corey Smyth, Vince Staples has become used to having the freedom for his creative visions to be realised. His latest undertaking, ‘The Vince Staples Show’ - a serialised, quasi-autobiographical rap sitcom - is our protagonist at his absurd best. We caught up with Vince between games of NBA2k19. He takes games as seriously as his art, because although he won’t admit it, Vince has a winner’s mentality, and so it’s fortunate that he can’t seem to lose. 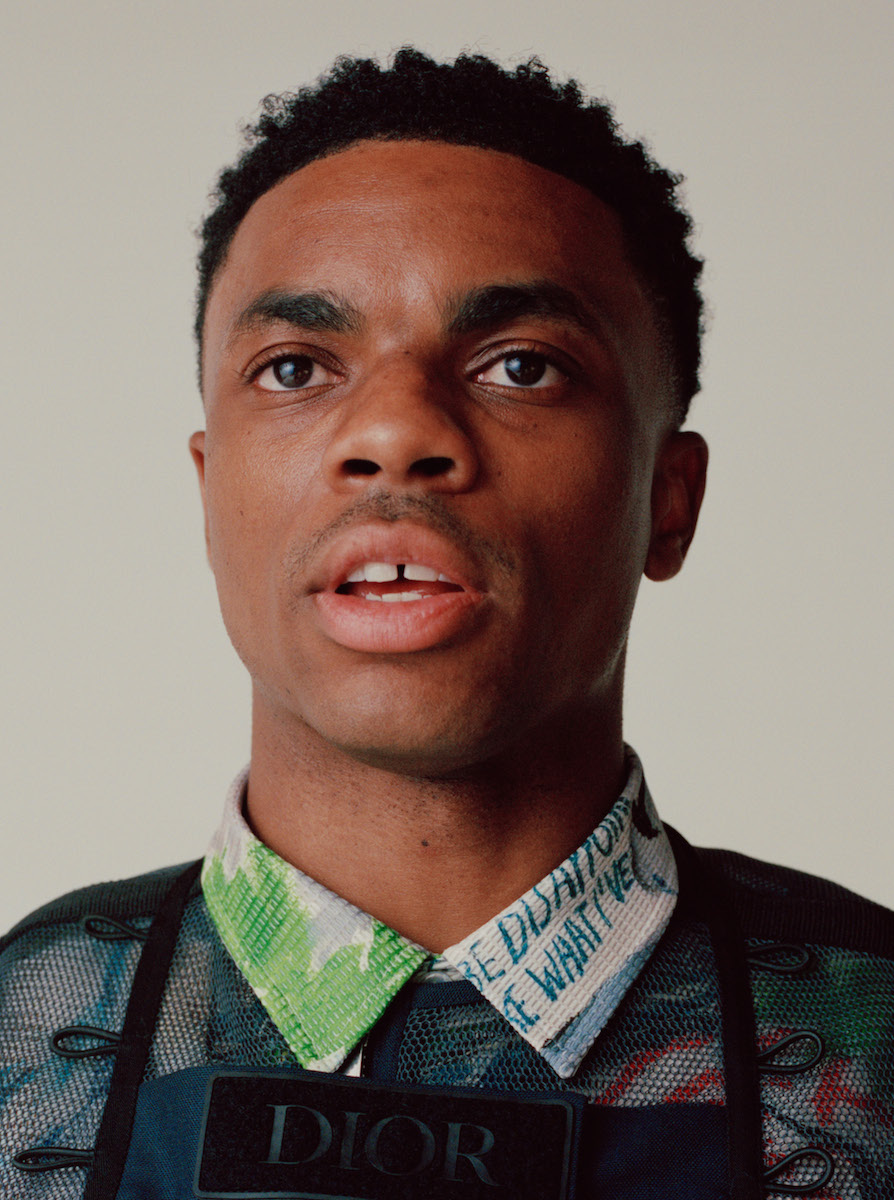 Hi Vince, how are you? You seem to have had quite a busy summer.
I’m good, can’t complain. I was at a few festivals. Shows are shows and if you do enough of them, they kind of become the same. In a good way. We make money each time, get good crowds. Eventually you take the best parts of all the shows and highlight them into one. You do enough of it, it’s basically a blur. How long has the project been in the works, and how long before that was it actually an idea of yours?
I feel like as people, we have these reoccurring ideas, and we try to figure out what they are, figure out how to articulate them. If you’re an artist or a creative person, then you need to figure out the different ways to realise these ideas. I guess it’s just the same thing I’ve been trying to create my entire career: There’s always a visual and an audio element to the things that I create. So, we’re trying to figure out how to bring all of that full circle and make something that is as complete as can be. I’m not trying to reinvent the wheel or anything. Michael Jackson had extended music videos, Prince had a film; I think it’s always been that way. It’s not necessary, but it’s something that I personally really love.

Do you feel like the process of writing a short TV series to go with an album was a natural transition from primarily focusing on the music?
I don’t know if it’s a transition because I’ve only been trying to make music for as long as I've been making music. It was never something that was pre-thought out; it was just something that kind of happened. Growing up, TV was a very big part of our lives. TV and music videos on MTV was my way into discovering what I listened to. And, when I was a kid, a lot of artists were on TV themselves, on MTV Cribs, or reality shows like [Flava Flav’s] Flava Of Love, Ray Jay’s show on VH1. Also Jay-Z’s Fade To Black, T.I, Ludacris, Nelly, Snoop Dogg, Ice Cube, Tupac - all being in movies. So I’ve always had that association; it’s just part of it.

Prior to this project, and its connection with TV, your album ‘FM!’ had a conceptual connection to daytime hip-hop radio. Would you say mainstream media is a big source of inspiration to you?
No, I think inspiration is something natural, not something you can hide or run from, you know? You only know what you know, and we’re being taught over time. Constantly taught, whether we notice it or not. I’m trying now, more than ever, to not shy away from my natural inspiration, because when I started to make music, it wasn’t from an inspired state. It was from a state of, ‘Okay, I’m with these people. They’re making music. How do I make music like them? How do I fit into this world that I had never been a part of?’ Now that I’m older, it’s more of an internal thing, it’s more of a ‘me’ thing: working with things that naturally draw my inspiration. Do you think things will be different now that you have signed with Motown, and your manager Corey’s new label?
There’s a lot to that, and I think the best way to address it is: it doesn’t matter. What matters is people hearing the music. When a kid listens to a song, they don’t say, ‘Oh, he’s signed here,’ and, ‘This is his deal structure,’ and all that. Why would they? They don’t care. I know I really don’t care as long as everything adds up. It’s the show, it’s the music, it’s the things that move people that matters. Everything else is secondary.

How would you define yourself at this point in your career? Do you ever compare yourself to other people?
I’m just a person. A person that makes things. That’s how I want to look at life: to be considered as someone who creates things and, you know, I want to fail, I want to succeed. I want to continue to create and I’m lucky I get paid for it. I can take care of the people close to me and that’s enough. I don’t really think about what other people do. All I think about is what’s going on in my community. I pay attention to my community, and my culture, and I don’t really care about anything else. We have people who do music, people that do film or television, or create on their own terms. We can have John Singleton having a show and Issa Rae having a show. They’re from different walks of life but the same community. We have so many influential musicians like Tyler, The Creator, Earl Sweatshirt, Steve Lacey, to The Internet, Kehlani, SOB x RBE, to Kendrick Lamar and Anderson .Paak. These things I see in my environment makes me feel like we’re moving towards progression. Maybe that’s because all we have to focus on as black people from a certain community is making things better, but for my two cents, people are creating opportunity in my community.