On an autumnal Monday evening in East London, Maria-Cecilia Simone Kelly, known to her fans as Rico Nasty, enters Birthdays followed by a small and friendly entourage. Down to earth, at first, she blends seamlessly into the crowd.

Her presence is felt, however, long before she sets foot onstage. In the bathrooms, the camaraderie is contagious and a chain of hyping, complimenting, and banter snakes out of the stalls, past the mirrors, through the hallway and towards the stage. The 21-year-old self-possessed DMV rapper is hard to pigeonhole; her latest mixtape ‘Nasty’ channels undulating fury and this is echoed by an on-stage presence that flutters effortlessly between mosh-inducing intensity and raspy melodic moments.

What is clear, from this alchemist of “Sugar Trap”, is that her sound reflects what her fans feel, and what she wants them to feel: rage, joy, power, vulnerability, resilience, and playfulness; all recurring themes.

“I imagine people are at a show when they listen to my work,” clarifies Nasty. Her work is also popular amongst workout enthusiasts; the tempo, intensity, and velocity translate well on-stage. 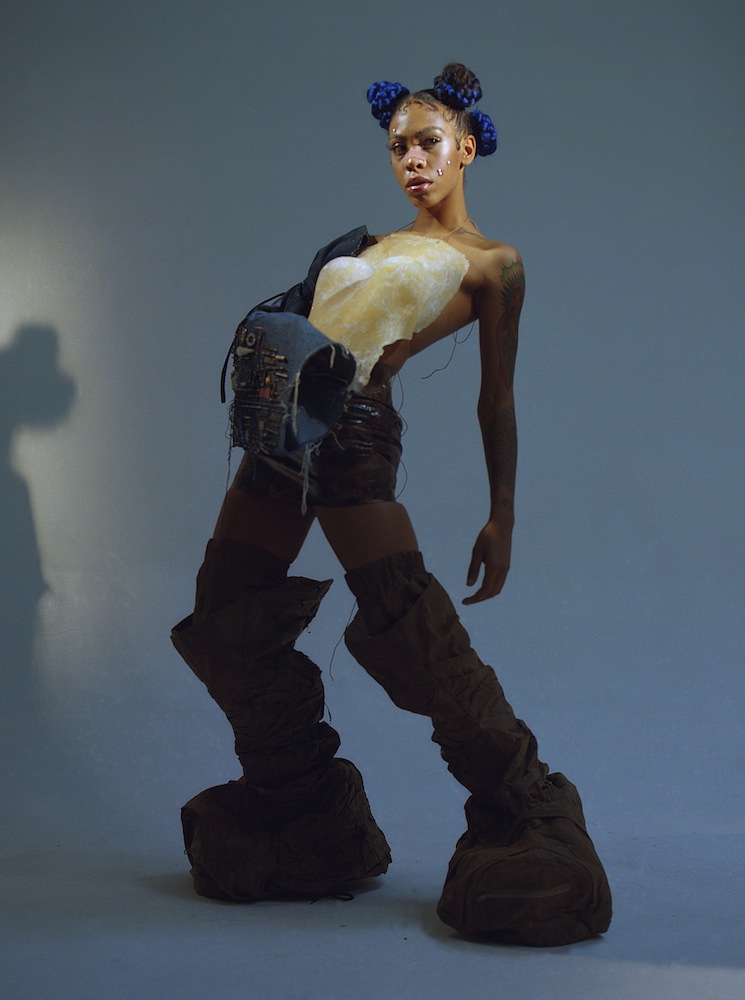 The set begins. ‘Bitch I’m Nasty’ blasts. The crowd especially animated by, “And I’m screamin’, ‘Fuck Trump! Black girls, stand up!’” In his recent essay for n+1, Notes on Trap, Jesse McCarthy invokes Fred Moten’s analysis of black music, asserting that trap is also “social music”; this is felt throughout the set – Rico makes social music. The whole show is a cocooned moment of communal joy in an otherwise dystopian reality. The crowd moshes, voices hoarse, tracing every lyric with spiritual commitment. This is a full-throttle out-of-body experience. Rico Nasty knows what she is doing.

The montage of Issa Rae’s character in HBO series Insecure walking from a rendezvous whilst listening to ‘Sugar Trap 2’ cut ‘Poppin’ signalled Rico’s entry into the mainstream. That, and the 4 million views the music video had garnered on YouTube. With the Hollywood Hills in the background, the cinematography captures her effortless swag. Anthem ‘Smack A Bitch’ reinforces her place as one of the most creative contemporary rappers; flawless delivery coupled with an animated performance that showcases her playfulness.

“I feel like I make music for when women want to feel powerful and have to walk past a group of men at the gas station,” she says, “the bitches who keep their headphones in and who are like, ‘I’ll fight all y’all while I listen to Rico Nasty!’” None of this is contrived. A few days later at Clash Studios, she is completely at ease in front of the cameras. Unfiltered, bubbly, and friendly, her approachability seem perfectly congruent with the artist onstage earlier that week asking the crowd to mosh o,r in the music video ‘Rage’, the rapper who declares she likes “bad bitches who be ragin’” behind a mesh wire fence.

Rico Nasty cares about her audience. “I’ve never had a fan make me feel uncomfortable,” she promises. “I feel like we could be friends!” None of the often-disparaging associations some corners of Twitter has about SoundCloud stick; “I’ve always had hella love for SoundCloud,” she explains. Rico’s fans, her hardcore Stans, however, come from YouTube, which she prides herself on.

“I like fashion, I like visuals, playing with eyes,” she continues, referring to the trompe l’oeil on her debut album cover where her hair is styled into the surname of her moniker. A consistent theme in her visual grammar is a surreal and almost psychedelic aesthetic that hints at influences from punk and grunge whilst staying firmly rooted in the trap arena. Money too, and charting the emergence from a life of scarcity to one of abundance is felt in this new record, “Money is definitely a part of my personal empowerment. It’s part of the genre too. It’s part of the culture,” she says. In this vein, ‘Counting Up’, ‘Poppin’’, ‘Why Oh Why’, and ‘Hockey’ are Nasty’s cultural contributions; lyrical tithes to sustaining trap dogma. And for the rapper, there’s nothing to be ashamed of, “Some people get greedy, but for me, it makes me appreciate where I came from. It’s something to be proud of. I’m 21. I’m black. I’m female. I want [my music] to inspire others to go get it, cos it makes you feel good and you feel like a bad bitch, cos you don’t have to worry about what everyone else is doing.”

Her commitment to experimentation within and beyond her own self-defined genre put her in a unique position; having juggled a few alter-egos prior to Nasty, including “Trap Lavigne”, she shows a fearless willingness to method-acting her way through each sonic iteration of her discography.

Asked to describe the visual inspiration for a hypothetical perfect show, she offers Edward Scissorhands, botanical gardens, Alice In Wonderland, Charlie And The Chocolate Factory and Candyland as mood board must-haves. Coupling playfulness, control over creative direction, clear front-stage and backstage boundaries place her firmly in the grand tradition of musicians who take their art seriously.

“What I’m trying to do is own it, instead of trying to blend in with what should be expected from a female rapper,” she states. “I think I’m going to own it; my voice, the brashness, the rawness, I’m just going to embrace and evolve with the lyrics”.

Rico Nasty knows what she is doing. And she is doing it very well. “I’m here to rage,” she says. So are we.