The Wombats On New Album 'Fix Yourself, Not The World'

Whether they would admit this or not, The Wombats are somewhat indie legends with bangers going back decades now. Well onto their fifth album 'Fix Yourself, Not the World' and with no plans of stopping, they have an innate sense of what fans want. And how to get them jumping on the dancefloor.

We spoke with frontman, Matthew 'Murph' Murphy from his home in sunny LA about why The Wombats were always going to make a fifth album (despite having their own solo projects: Murph with Love Fame Tragedy and Daniel Haggis and Tord Øverland Knudsen with Sunship Balloon) and why they've worked too hard to even think about stopping now.

Recent single 'Method To The Madness' is much slower than we're used to from the lads and some even suspected the band were heading in a new direction. "From a musical perspective, Dan and Tord were over here in LA in 2019 and we'd written a couple of songs together that I just thought were a bit indicative of one that's on the last couple of albums. So, I definitely wanted to push the boat out a bit further. And I remember playing this thing on my upright piano and then it all just came together really nicely. Dan elaborated on that piano part a bit more and then lyrically, it kind of follows similar themes that I think weave in and out of the album."

Murph finds inspiration in the places he visits and the sort of vibes the places emanate. "I kind of see 'Method to the Madness' taking place in Barcelona. I went to Barcelona after I got married in Spain and my wife and I hopped around Europe for a bit. There was this feeling that everything had changed, but also everything had completely stayed the same as well. So that's where a lot of the lyrics came from. And then, I guess, the first two and a half minutes, the song are about trying to find some kind of order in the chaos that was surrounding me."

Then, in the last minute where I say 'f*ck' 16 times is the, the element of letting go and questioning why I need to spend my life trying to figure everything out, and maybe I should just let it happen.'

"...this idea of letting go and maybe being a bit more present than I have been" is a big theme on the upcoming album.

Cursing "16 times" per minute is all well and good, but - as a musician- is it hard to know when lyrics are too dark or too cheeky? Murph thinks he has established a "balance". "There were some lyrics for the second album which were really dark, but those songs didn't really end up anywhere, thankfully. I guess the lyrics have to pass a few tests like 'do they really excite me'? And 'are they vivid enough to warrant inclusion in the album'? I think that's more important than whether something's too dark or something's too humorous, although, you do have to try and get the balance. I'm pretty good at editing. I know when something is just far too one way and something is far to the other way." 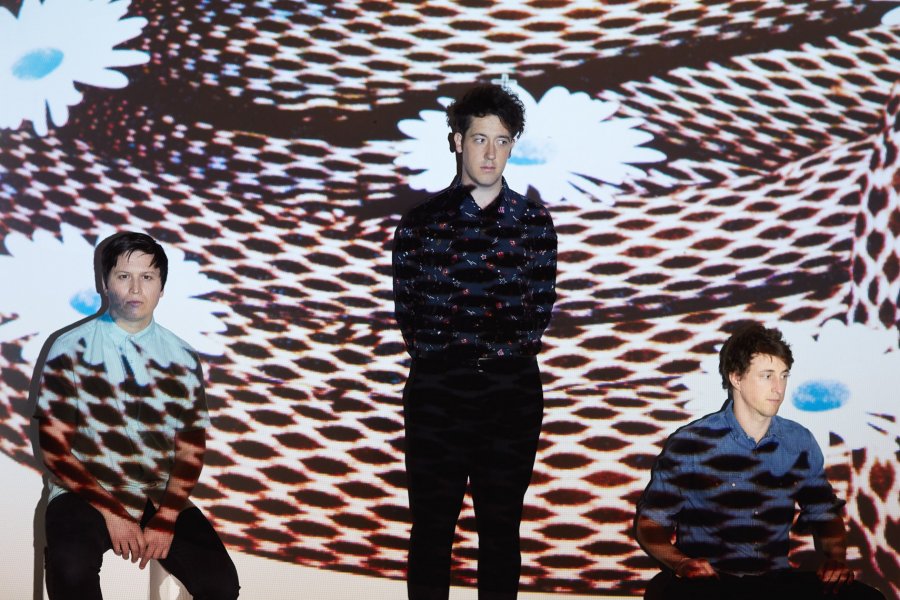 Current single 'If you ever leave, I'm coming with you' is one of the more 'pop' songs from the album. "I think it was born out of...At the start of the pandemic, we didn't know what was happening. We were like, 'what should we do now?' Like, 'Okay, let's start drinking at 4pm'. And then, 'let's order pizza tonight' or whatever and then, as soon as that cloud got lifted, and we realised what we were in, I saw all these strains on people's interpersonal relationships. The divorce rate, especially in the US, started trending upwards. And I think that was the birth of this particular song...But that's kind of where the song came from."

So how did the new album come about? Murph explains, "In 2019, Dan and Tord came to LA around three times, with a view for writing for our fifth album, and we got quite a solid body of work together...But there was never a question that we... we were always going to come back and make a fifth album."

Why stop at five?

"I think one of the things I really want to achieve with The Wombats is to get to album six, seven, eight - whether it kills us or not. We've come too far and work too hard now to ever really stop. Yeah, there was never a doubt that we weren't going to start getting up banging our heads together over this album as soon as possible, really, and it'll be the same for the next one.

'Fix Yourself, Not the World' is "the little idea that has been circling in my mind over the last couple of years". "Carl Jung had this idea that if you fix something within yourself, you simultaneously fix it out in society. I think maybe the title really is something more like, 'only point the finger outwards as much as you can point the finger inwards', but it's not as good of a title."

The Wombats are no strangers to energetic live shows and their Reading and Leeds performances and UK tour will be no different. It's just a question of how they are going to top their previous shows. Murph is desperate to play live again. "Really excited for any kind of live show. Anywhere! With whoever, let's be honest." However, playing at the O2 Arena in London feels extra special, because it "feels like a landmark moment for us".

Playing live again, with the COVID-19 situation, is daunting. "To be honest, playing live brings a combination of absolute fear and an immense amount of excitement. Fear, because we haven't played for so long. We've got two or three days of rehearsal before going into the Reading and Leeds weekend... It's going to be strange to be onstage again in front of that many people."

The Wombats have not survived all these years, and gained fans across generations without knowing how to wear their hearts on their (slightly anxiety-ridden) sleeves. Their new material sees them working through and resolving some of these issues, so the material has matured but they still have a talent for creating absolute bangers.

'Fix Yourself, Not The World' will be released on January 7th.

Catch The Wombats at the following shows: