Annie Clark needs oat milk. The request arrives quietly and politely just before we speak, a hushed nothing off-handset before she picks up the phone and greets me brightly. Does she need any of mine, perhaps?

“Could I borrow some? Would you do that? I need to reach my maximum caffeination, and I haven’t met my quota for the day. Oat milk’s an integral part of it.”

If it seems like a wholly unremarkable exchange between a musician and a journalist, you may be unfamiliar with the various tales of Clark’s mercurial attitude to press interviews over the past decade or so. Previous set-ups have included requesting interviewers crawl into a small space to “challenge” both parties, playing pre-recorded answers to boring questions, asking the interview if they “enjoy doing this,” or simply refusing to answer at all. The result has largely been a proliferation of beard-scratching discourse about who or what constitutes the ‘real’ St. Vincent, or the ‘real’ Annie Clark, and how much one might inform the other.

It’s a concept that was exquisitely toyed with on her 2020 concert mockumentary The Nowhere Inn, a film that began life with Clark bringing actor, director, and Sleater-Kinney legend Carrie Brownstein on board for some interstitial scenes. The pair soon decided it would be more fun for them to play up to the mythos, presenting Clark as simultaneously boring off-stage, hyperbolically cold and self-aggrandising in rock diva mode, and ultimately unknowable across both. The result was an assortment of mixed critical reactions to its postmodern flair, but also a sense that, whatever her public perception, Clark is most definitely in on the joke.

“Wait, I didn’t know anybody thought I was a megalomaniac!” she cuts in at one point, seemingly horrified when I choose the word to describe the way her demeanour is occasionally presented in the press, before easing into a laugh. “No, I’m just kidding.” At any rate, Clark certainly feels that it worked. “We made a bold choice in that film, in the world of needing to seem relatable and likeable,” she says. “And we were both like, ‘Let’s just be monsters’.” Besides, when it comes to differentiating between the multiple personalities on screen, Clark initially tells me she “doesn’t really know the difference between any of it” or even “where persona begins”.

“Actually, you know what? That’s not true,” she doubles back. “As far as art goes, that’s outer space. To me, music is absolute outer space and I’m just in it. But if I’m on a stage, I’m performing, I’m giving you a show. I’m not in my living room.”

Part of the problem, according to Clark, is social media: the faces we paint on every day to convince varying ratios of loved ones and strangers that we are funny, or smart, or sexy, or good at writing songs, or bad at explaining what praxis means. “Whether it’s like, ‘Hey, I’m a self-help guru with – sidebar – no actual qualifications’, or, ‘Oh I’m an influencer,’ ‘I’m a brand of some sort,’” she says. “It’s all very performative.”

Another scene in the film supposedly depicts Clark’s life back home in Texas, surrounded by her mother, step-father, and a small army of siblings. The details are ostensibly correct: after being born in Tulsa, Oklahoma, Clark’s parents divorced when she was three, going on to provide her with four brothers and four sisters from their respective families, and she moved with her mother and two sisters to Dallas aged seven. But, like much of the film, nothing is quite right; Brownstein, playing a version of herself as the increasingly bewildered filmmaker, scolds Clark for bending the truth about her life again.

In 2006, around the time she was leaving the Polyphonic Spree and joining Sufjan Stevens’ touring band, Clark adopted the name St. Vincent and released an EP, ‘Paris Is Burning’. The following year saw her debut album, ‘Marry Me’, showcase both her musical talents and indefatigable sense of humour (the title alludes to the phrase repeated by Arrested Development character Maeby Fünke while trying to convince everyone she’s an adult).

It’s a period of her career she looks back on with fondness now. “It’s sweet. I mean, I think it’s how you would look back at your early junior high school yearbook photos,” she says. Not that it was an easy ride. “When I really think about it, I probably played every dive bar in America, and plenty of pubs in England. It’s been slow and steady I guess. But yeah, if you really zoom out and look at where I started and where I am, it’s quite a journey.” That journey has led her up to 2021’s ‘Daddy’s Home’, an album that once again found the artist embracing serious subject matter – namely, the release from prison of her father the previous year, following a nine-year stretch as part of a stock manipulation scheme – alongside “black humour,” apparently without fear of contradiction. Alongside all that, there was a shiny new St. Vincent persona inspired by Candy Darling, Cassavetes heroines, and a general love of early ’70s New York chic. But that wasn’t necessarily what drew critics’ fascination.

When I speak to Clark, it’s the day before the album’s first birthday. I wonder if she’s still bothered by how the world – and particularly the music press – received it. “The only thing in the reaction to it that I found quizzical, shall we say, was this idea that all art needs to be educational, and appropriate, and non-fiction,” she says. “Like, it either needs to be a blood-letting, or you need to be solving the prison industrial complex. It’s just some music!”

It’s another issue that Clark sees as a representative of a more general malaise in society, a perceived ideology that refuses to allow art to exist in shades of grey. “Everything in the world is being viewed through that prism right now. But you know, that’ll pass. I think if there was anything in the criticism of it that had me scratching my head, it was just this idea that it needed to solve something.” Outside of art, the picture is different. In June 2020, Clark took part in an online conversation with Three Point Strategies founder Jessica Byrd, addressing how best to move forward – particularly as an ally – following the murder of George Floyd and the subsequent groundswell of support around Black Lives Matter. Clark can be seen listening diligently in the clip, at one point assuring she would be “continuing to give, to try to be on the right side as we go forward”. I ask what she’s doing to keep that promise.

“There’s a school of thought that says that…” she trails off, then sighs. To her credit, Clark doesn’t offer easy soundbites, or pre-rehearsed lines, but can instead be heard audibly thinking through the question, unafraid to walk back her first response to find something more eloquent and succinct. She tells me she donates to GiveWell, and an NGO whose name escapes her, and talks of their work funding mosquito nets in Guatemala and supporting women in Sub-Saharan Africa.

“But part of me feels that I don’t think everybody has to have a public-facing opinion on everything. We’re being asked to. But it doesn’t mean anything to me to post a Ukrainian flag on my Instagram if I’m not helping the people of Ukraine in a material way. If I’m going to post about something, it’s something that I’m actually giving to. And I give to other things that I don’t post about, whether it’s fundraisers for Planned Parenthood or…”

She trails off again, before landing on the summary: “Do it or don’t. But don’t talk about it without doing something.”

It’s easy to get the impression that Clark is careful in what she says out of concern that her words will end up mangled on the internet. Does she worry about nuanced statements being lost in the miasma of hot takes and retweets? “I mean, I think I try not to make nuanced points,” she says.

“There’s certain waters I don’t need to wade in. And I mean that truly. I think a lot of people think their opinions matters more than it does, and I don’t. I think making great work – that matters. But I don’t think my opinion matters that much. And if I’m not doing anything to materially change something, I don’t need to weigh in on everything just to virtue-signal. Like, ‘Hey guys, I’m on the right side of history too!’ That doesn’t do anything.” Clark knows what making a difference looks like. She rhapsodises about how Byrd was instrumental in helping Stacey Abrams’ campaign in Georgia – the state that swung blue in the 2020 US election that proved decisive in Joe Biden becoming President. She talks about her mother’s work as a social worker, her sisters’ work in non-profits.

“It’s big and sticky and ugly and beaurocratic and slow, but I know people who actually do the work, and so I just want to be supportive of them and listen to them and see what’s going on, see how to be helpful in that way. But I don’t need to smugly signify. It doesn’t do anything,” she says. “It makes you feel good. And then what?”

Ultimately, she tells me, Clark isn’t too fussed about building an immaculate legacy as St. Vincent, or scrapping to be recognised among the greats. “I don’t know that there’s any way to control any of that anyway, except to just try and make great work. You know, in some ways it’s so complicated, and in other ways it’s just hideously simple.

“Try to make great work. Just try to write great songs. That’s kinda it. I mean, therein it’s difficult,” she says with another burst of laughter. “It’s not easy to push or to work every hard every day trying to make art. But I’m lucky to get to do it.”

By the time our conversation draws to a close, the fragmented, hall-of-mirrors diva held up to the media – and satirised in her own film – feels more distant than ever. But she’s right about the humour in her work: it’s there when you know to look for it. It’s present in abundance today, maximum caffeination or otherwise. “You know, I’m not going to write the article for you,” she says as we wrap up, “but I think you should lead with the oat milk thing. ‘St Vincent slams cow milk’.” I tell her I’ll think about it. 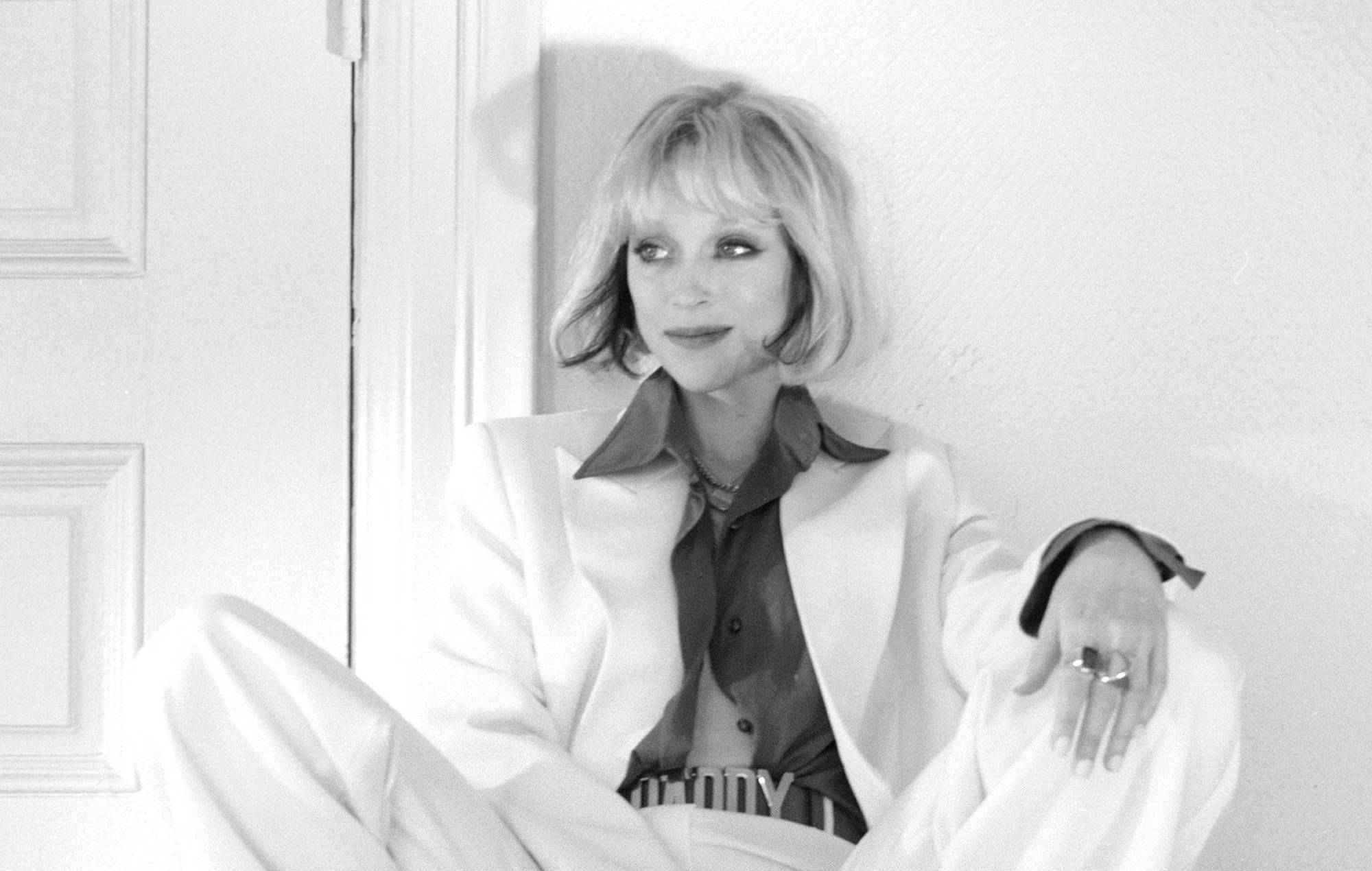 As an artist, she’s made mistakes, apologised to journalists for being a “royal dick”, grappled with the best use of her platform to leave the world a little better than she found it. But she’s not necessarily looking for validation from any of it. To paraphrase the narcotic lyricism of one of the more grandiose tracks on ‘Daddy’s Home’, Clark doesn’t live in the dream the world has painted around her; the dream lives in her.

“I guess what matters to me more is actually still mystery: going through the entire process of deconstructing everything, and still not having the answer. And I think it’s fine to not have the answer. Some days I think I have the answer, and other days I’m completely in the wilderness. And that’s okay. That’s okay with me, it really is,” she insists. “One thing that makes me feel good about what I do is that, at the end of the day, it’s music. It’s not exploitative. My highest aspiration is that it’s Beautiful with a capital B. But the rest is, like, shoulder shrug.

“And at the end of the day, it maybe makes some people’s lives better. So that’s great,” she says softly, almost to herself. “That’s great.”