As Ten Lee - a vocalist and dancer in K-pop groups NCT (with whom he debuted in 2016) and Super M, and Chinese group WayV - is musing over his proclivity for partnering music or visual styles in a way that others deem strange, he veers off on a tangent. “Anything can be matched… except juice and coffee,” he says, suddenly. “Those two should never be.” Ten is infamously anti-fruit. It stems from a mistaken process of association in childhood where “I had the image of a spider and the image of fruit mixed up,” he laughs awkwardly, “so now whenever I put fruit in my mouth, I think there’s spiders in my mouth.”

Random abstractions such as this pepper his rapid-fire conversation, like small fireworks fizzing through the dark. Excitable, enthused and sharply alert, if Ten’s energy was visible it would be a shimmering mantle of gold and silver dust. As a dancer, he moves with a sinuous, controlled power that can shift from elegant to explosive on a single beat. As a visual artist, the Bangkok-born, multilingual 25-year-old recently added the title of designer to his growing list of achievements, launching an already sold out collaboration with the bespoke merch platform Represent.

Aptly, he named his collaboration “What is ??? THE ANSWERS”, for although being a chameleonic artist is one of Ten’s greatest strengths, the personality traits that enable this created within him question marks around how he saw himself fitting into the world. “People ask me, ‘What kind of music do you like?’ And I say, ‘I like R&B but hope it sounds rock’. And they’re like, ‘That doesn’t make sense’.” It was troubling to Ten that people began telling him who he was and how he should be, instead of accepting him as is. 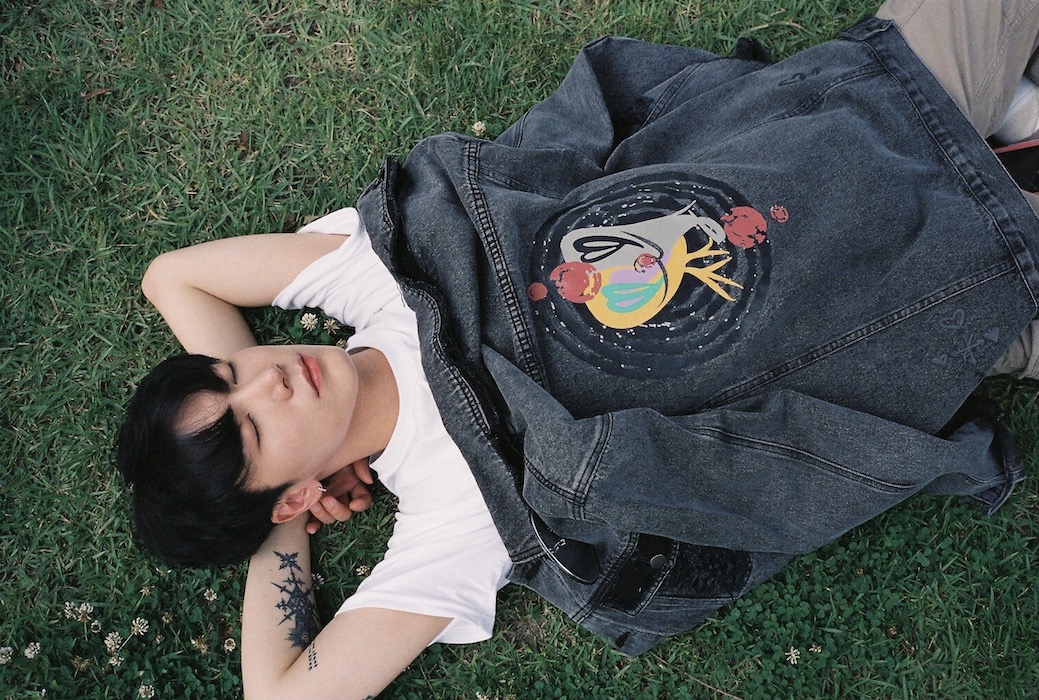 In a recent Instagram Live, the myriad of Ten’s contrasts tumble forthwith. He’s the doting cat-dad. His inner emo, who loves rock music, shows off dried roses, with the stern, black, geometric lines of the large tattoo on his inner right arm sometimes visible. But he’s also delicate in a way, with his butterfly tattoo and hair lightly permed, who names daisies as his other favourite flower, and plays Fousheé’s breathy TikTok hit, 'Deep End'.

“Have you seen the image where I have my name in a cross in lots of different languages?” He pulls the image up on his phone. The design sits on his Represent long sleeve tee. “I was thinking [about this], like, what you’re saying... Ten has this luvvie flower side and a very ‘rawwrr!’ side. I’m always like, ‘Ten, what kind of person are you?’ I do ask myself that, too, because everything I like is so different [to the other].” He could have conceded, and reined himself in. He’s pushed back instead. “I thought, ‘I can be anything I want, I can be this in the morning and this at night. I can be any person I want to be’. And that’s what makes me comfortable and happy.”

On his Instagram, Polaroids feature scrawled messages, like “Don’t tell me what to do!” and “Whatever! I’ll do it my way”. The designs of his collaboration seek to challenge being boxed in by other people’s standards, thus limiting ourselves. The recurring symbol of a cross tipped with arrows is a nod to the Chinese letter for 10, but doubles as a plus sign. He’s added it to his Instagram, writing “TEN_+•10” in his bio. “A plus sign can mean that you’re adding on and growing.” He points to another version of the arrow-cross, one with short diagonal dashes between its points that symbolise light. It means, he says, “that I’m radiating. I’m burning, I’m active, I’m doubling myself.” He touches his forearm, where crowning his geometric tattoo is a blazing sun. “I have this, like, if you want to be the light, you have to burn. I relate to that.” This isn’t to say Ten’s self-exploration is complete. While celebrating his strengths, the artwork also portrays parts of himself not yet conquered. He admits to being a chronic overthinker: “Even very small things that happen to me, I rethink a thousand times, and I get stressed out because of the things I do. Like, the main theme [here] is me overthinking but trying to find an answer even though it doesn’t have any answer.” Fittingly, spiral shapes dominate his designs, looming large amongst bright, bold shapes that evoke 80s Pop Art and graffiti, though Ten shies away from defining himself as “fully an artist, I’m not in the position to say things like that yet.”

“I’m still learning and trying new things. You learn by getting different elements from different people and I’m in that stage now.” He enjoys wandering the infinite halls of Instagram and Pinterest where he screenshots art that he likes, lost in the images, often for hours. He explains that he’s mostly influenced by whatever his current visual obsession is. “I’m interested in tattoos lately so my paintings look like tattoo designs. I’m that person who, when they see stuff, it goes into my brain and instantly comes out from my hands,” he laughs.

Ten’s introduction to art and design was through his mother, who believed music, art and sport were more important in a child’s development than traditional academia. “She didn’t care if I got an A* or not, just don’t get an F or a D,” he grins. Like any kid forced to do something, Ten railed against spending his weekends at art school. He attended but he didn’t draw. He befriended his teacher and other pupils and, as they worked, he chatted. “I was a very talkative kid! When I came to SM Entertainment (in 2013), I had a lot of my own time because my parents were in Thailand and I was alone. I had to absorb all the new culture and adapt to a new environment.’” When he felt surrounded by “negative energy”, he began drawing, enamoured with the space and freedom it offered because in art, as he often says, “there’s no right answer.” There is, however, sometimes a middle ground. His goal was to make the Represent collection accessible to his diverse fanbase. “I wanted to make things that people can easily wear because it was my first project to make something with clothes and it’s a collab. If you go too far out, no one will get it. If you go too far back, people won’t reach for it. So finding the middle ground is important but that’s the hardest thing to do. If it’s my own project, I’ll be like, ‘I’m the president of this brand, I’m gonna make all the weird clothes that I can imagine!’”

He sought second opinions to ensure his designs landed the way he hoped. “I have a lot of good friends around me - my choreographer, (SHINee and Super M member) Taemin hyung, my manager. I randomly ask people I’m comfortable with and have known for a long time, like Mark (Lee, of NCT and Super M). Mark has the same kind of perspective as me, but I’m a person who is arrghhh!” He waves his hands in the air. “And he’s very calm. I need a person who is opposite of me because when I’m in a mood, I talk nonsense - ‘I wanna do this, I wanna do that, I wanna make this!’ - and Mark’s like,’Bro, calm down’,” he says in a rather uncanny impression of the Canadian-Korean.

Ten works fast when he’s drawing. He has to. He describes his personality as someone who can't wait until the next day to do something. “I’m very impatient,” he smiles. “If I’m going to paint or draw, I’m going to finish it in, like, two hours. I can’t sit down for three hours.” When inspiration hits him, it’s off the back of deep contemplation, sometimes about the mundane - “Like, why do the cats come to me when they’re hungry only? Is it selfish or instinct? - at other times, something affecting him emotionally. But whereas his job as a singer and dancer sees him project his energy outwards, art offers the opposite. He’s often alone in his room when he works. As is for many artists, the right mood is fundamental. “When I’m in a good mood, I can’t draw,” he half-sighs. It’s also a multi-sensory process. “Smell or the temperature of the room, that really helps me draw. I light three or four candles. And when I draw, it’s kind of heavy, the feeling,” he explains. “It feels like you’re sinking into something, into yourself, and everything seems so small. Everything narrows down into me, my pencil, the paper.”

The more work he does in different creative mediums, the less Ten’s desire is to keep them separate. His art, dance and music influence each other, whether it’s customising his own collaboration pieces, a choreography video in an art gallery or dancing underwater with a film crew. When someone tells him that something won’t work or match up well, he refuses to let the idea go until he’s attempted it.

“I’ve had that since I was young. I think everything is possible. If you don’t try, you don’t know. When people say it’s impossible, like dancing in water for three minutes, I’m like, then let’s make it possible. You don’t need to walk a straight line [in life], you can walk this way,” Ten says, pointing along an invisible line before switching sharply in direction. “Then go back on track, go that way, come back. No one should tell you to walk in a line, I don’t see the point of that.”