Jeffrey Boakye On The Empowering Impact Of Neneh Cherry

For too long now, Black British music has been left undocumented.

Sure, plenty of voices on the fringes were trying to make themselves heard, but in general the evolution, successes, and triumphs of Black British culture have been allowed to become blocked off.

The past few years, however, has seen a noticeable shift in publishing and media more broadly, with a number of writers spearheading to reverse these expectations.

Jeffrey Boakye is one of the most formidable. The industrious author is practically a one-man industry, matching regular columns with a range of top titles to an ever-increasing catalogue of fantastic full length books.

His book Hold Tight: Black Masculinity, Millennials and the Meaning of Grime is an essential take on some iconic artists from modern British music, as well as studying shifts in Black culture, and Black masculinity.

New tome Musical Truth: A Musical History of Modern Black Britain in 28 Songs is a fantastic read; aimed at a slightly younger audience, it's essentially a primer on 28 seminal artists, who each helped re-define what it means to be Black and British.

Structured around a playlist of 28 songs - and boasting superb illustration from Ngaqi Smart - it features the likes of Craig David, Stormzy, and many, many more.

We're able to bring you a chapter on Neneh Cherry, and it gives a flavour of what to expect from this must-read title.

The picture hit me before I ever heard the music. Looking at it now, it’s even more formidable than I remembered. A mid-shot of her, white background, no distractions, with gold dollar sign earrings dangling from each ear, an Egyptian pharaoh’s golden headed pendant hanging from the neck, arms wrapped defiantly across a bare-shouldered torso, hands bandaged up like a boxer after the twelfth round, jaw jutting forwards, mid-pout, and her name, NENEH CHERRY - sans serif and all caps, right across the middle.

I was born in 1982, the days when music was something you could physically touch, pick up, and play in and on machines designed expressly for that purpose. My two sisters are a generational half-step older than me. I distinctly remember the floor of their shared bedroom being littered with what seemed to be huge and shiny squares of cardboard featuring pictures of artists with big voices, big personalities and big hair, not necessarily in that order. Most of these artists were women. But, growing up in a house full of women, in what was essentially a matriarchal household, this didn’t register at the time as being anything out of the ordinary.

My worldview was filtered through the preferences and lenses of my older siblings, and their musical tastes had an undeniable gender lean. I’m talking about Salt and Pepa, the Wee Papa Girl Rappers, Monie Love, Lisa Stansfield, Whitney Houston, Madonna, Sade, En Vogue, Queen Latifah… Female performers who were pushing the dial on what women could achieve in the world of pop. And, of course, there was Neneh Cherry, whose debut album, Raw Like Sushi, burned an indelible imprint upon my pre-adolescent psyche.

In 1988, a year before the album first came out, Cherry made an iconic appearance on Top Of The Pops performing ‘Buffalo Stance’. There she was, prime-time viewing, throwing shapes and spitting bars. She also just happened to be seven months pregnant with her second daughter, Tyson. Here was a young, working mum, doing up womanhood like we’d never seen before, complete with gold bra and black mini-skirt, calling you a punk if you dared to disagree. Watching Top of the Pops each week was a bit of a ritual for me and my sisters, so I know I must have seen it live. It’s a safe bet that we probably had a go at emulating a few of the dance moves (a much-loved TV-related activity of the era), minus the baby bump of course. Remember, this was the 80s slash 90s, when dance moves looked like unarmed combat. In response to one critic who asked her if it was ‘safe’ to perform on stage in the third trimester, she replied, ‘It’s not an illness’. I mean, the patriarchy never stood a chance.

No wonder my sisters looked up to her. It was impossible not to. She represented everything empowering and unapologetic about femininity on the approach to the new millennium, a genre-defying symbol of genuine multiculturalism and a new kind of matriarchy, calling out gigolos on the street and telling them not to get fresh with she. I was singing along in solidarity with causes that I didn’t understand, in celebration of the female perspective. Whatever the hell a gigolo was, I knew that I didn’t want to be one.

I became more and more of a Neneh Cherry fan as time went on. She stayed relevant and visible throughout my teenage years, well into the 90s and beyond, one of those mainstay artists who drop classics with clockwork regularity. Now, in the streaming era, at home with my own family, it’s not unlikely to hear a Neneh track pop up in a playlist or two taking me back to those days of aerobic dance moves, deep lyrics, and, when I think about it, self-discovery.

I didn’t see it then (I was seven), but these were women who were breaking down the gender-bolted doors of modern pop music. The female rappers especially were like hiphop activists, refusing to submit to toxic masculinity, refusing to conform to the objectification of the male gaze. When they spoke, they spoke to and for other women, advocating a lived experience that I knew very little about. But I felt that they were speaking to me too. For pre-teen me, looking up to black women felt like the natural order of things. Not how things should be but simply how things actually were.

Like everybody else in the modern West, I’ve grown up in a society where Black women are both maligned and marginalised, suffering from what has been called misogynoir: the dual oppressions of racism and sexism. Looking back, I was fortunate enough to swim in feminist, anti-racist waters before it was too late to learn. Being exposed to my sisters’ role models was an education I didn’t realise I was receiving, or understand how lucky I was to be doing so. It’s only fairly recently (I’m talking within the past five years) that the term misogynoir even flagged up on my cultural radar, even though I was always aware of how much of a problem it was through the experiences of black women around me. It’s these kinds of realisations over time that are most powerful, when you fully realise things you’ve always felt to be true.

Now, as an adult, I find myself looking out for big sisters in the world at large. I hope I’m not alone in this. Thirty-two years after Neneh Cherry stood there, blasting female confidence into the patriarchy, we’re still in a world that is low-key screaming out for sources of leadership other than middle-aged white men. In 1989 she asked us if the manchild will ever win, and maybe, thankfully, he won’t. Not on his own anyway. Then in 1996 she told us that it’s a woman’s world, and maybe, hopefully, we’re getting closer to that ideal.

Earlier this year, when Kamala Harris became the first female and first non-white, mixed-heritage Vice President in US history, it was a defining moment for the world, and perhaps evidence of long-awaited progress in representation.

Times have changed. I no longer share a house with my older sisters and it’s been decades since I first saw Neneh Cherry in her buffalo stance. You can tell from what I’ve written here that it was a defining moment of my own, and while this moment had nothing to do with global politics on the world stage, it helped me to see what kind of world I was in and what kind of person I wanted to be. There I was, a little boy thinking, ‘when I grow up, I want to be like the woman with the dollar sign earrings. I want to be like Neneh Cherry.’ Which is cool. And closer maybe to how my sisters would have felt, as young, Black women, listening to artists that make you hear the world differently. 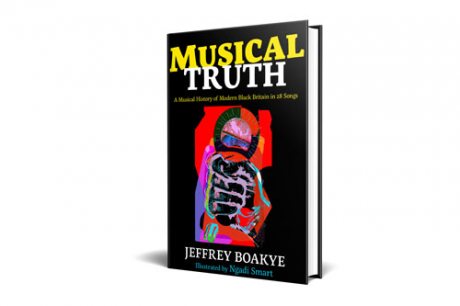