“I’m just really young, so she has to be here,” says Billie Eilish, swamped in an oversized jumper and sat next to her mum in a busy Los Angeles café on a Saturday morning. It’s the only day Billie has time to talk before embarking on the final leg of her Where’s My Mind tour, following her debut EP ‘Don’t Smile At Me’, released in August last year. Skulking in at midday with her parental chaperone – black hood up over a black beanie covering most of her light blue hair that matches her eyes – she chats candidly about what it means to be a 16-year-old rising star who has never known a world without the Internet.

“Before that? To be honest you with you, though, I’ve always, like…. Instagram has been the thing,” she says in an English vernacular that’s rife with the qualifiers, filler words and fragmented sentences typical of a Californian teenager. “I remember when I was 12 and there was this meme account that follows me still, but they were like me and all my friends’ favourite meme account. It was so stupid. Do you remember when ‘Alex from Target’ was a thing, do you remember that?”

She’s talking about the 2014 online joke that began with a photo of a good-looking adolescent cashier scanning and bagging purchases at the discount retailer. “Everyone just thought he was really hot and they called him ‘Alex from Target,’ so this meme account posted that they made a hoodie that just said, oh my god,” Billie says, pausing for a chuckle. “It said ‘LOL you’re not Alex from Target.’ I bought it, and I wore it, and I took a picture of it, and I posted it. The meme account reposted it, so I thought that was a huge deal and everyone was like, ‘Oh my god, Billie you have 400 new followers!’ So then I had 600 followers and I thought that was such a big deal.” 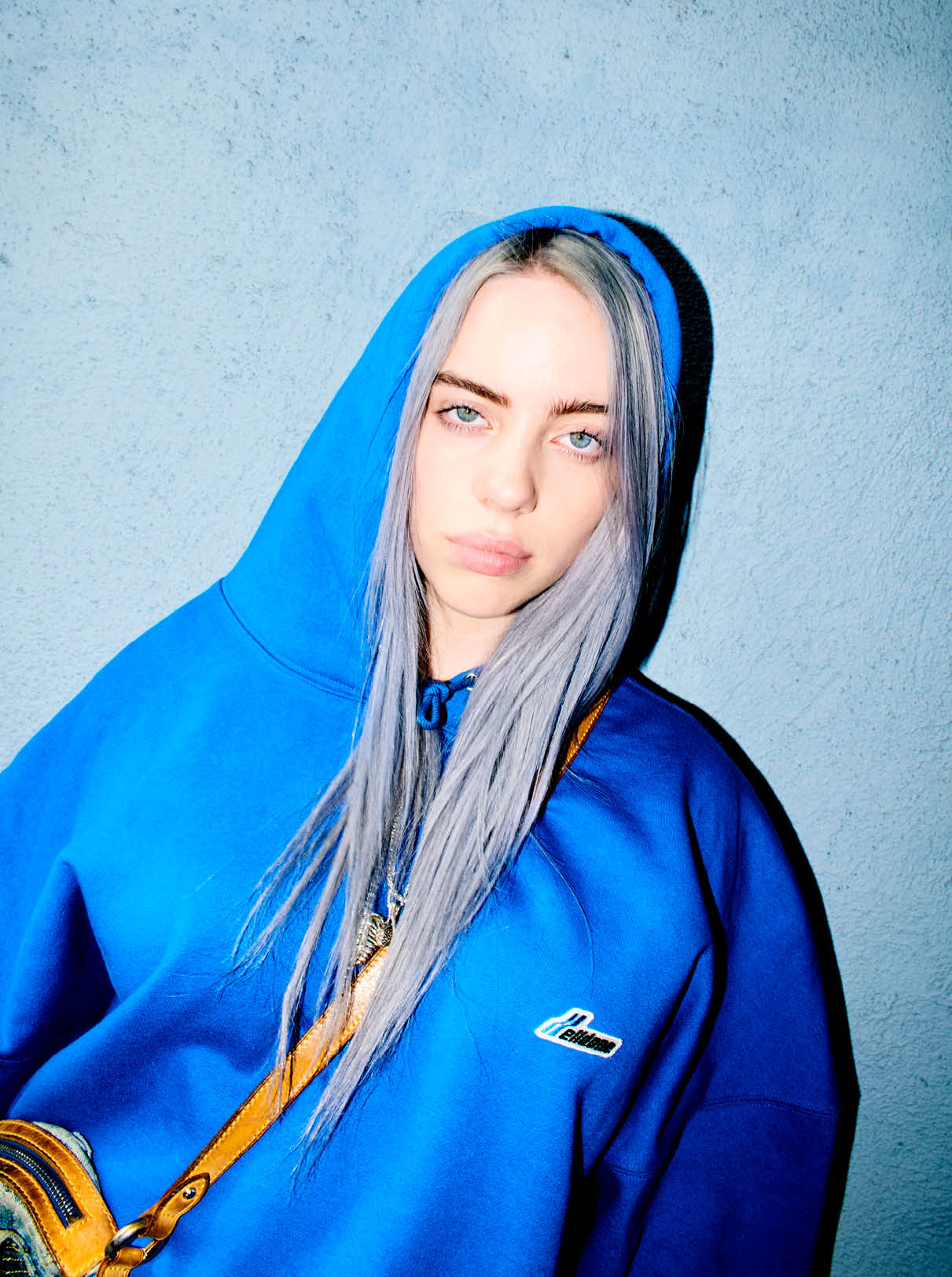 Now Billie’s reach stands at 1.9 million followers. Her account handle, @wherearetheavocados, is the same as it was four years ago and it’s part of a global network of very young social media personalities with huge audiences and names like @tsuwoop_, @gullyguyleo and @imran_potato. “I didn’t even know what a fashion influencer was but that was sort of what I was, in my own way,” she says about her place among her peers until now. “That’s just sort of how it’s always been; I’m like the avocado, or whatever.”

A quick swipe through Billie’s account features the LA native posing in all manner of street-inspired fashion pieces, from graffiti graphic alien-themed track suits to Gucci and Chanel bootleg fusion board shorts. The style is not so distinguishable from her friends’ accounts, except for one important factor: Billie Eilish is also a singer-songwriter who just so happens to be very, very good at it.

There’s so much time wasted, working with people you don’t know…

Growing up in the Highland Park neighbourhood of Northeast LA, the home-schooled performer comes from a family of entertainers, including her actor and musician parents, Maggie Baird and Patrick O’Connell, and a brother, Finneas, who had a recurring role on Glee. Billie has been singing herself for as long as she can remember (“I was singing when I was coming out of my mother”) while it was a song her brother wrote, ‘Ocean Eyes’, that set her career in motion.

“We’ve always been a really musical family, in sort of a gross way,” jokes Billie, whose easy interaction with her mum is testament to the fact that the Baird-O’Connell kids’ creative pursuits are very much a family affair. “You know, like some car commercials or music commercials – no, that’s not a thing – car commercials, where it’s a whole family in a car and somebody starts tapping on the window?” says Billie before continuing breathlessly: “Then somebody else is like boom and everybody makes the beat, then somebody starts singing, and somebody starts singing harmonies. That sounds really unrealistic but we’re like that, bro, we’ve always been like that.”

In witnessing the egalitarian relationship between Billie and her mum – where Billie cusses freely and often (“When the fuck were we in DC?!”), while speaking with the kind of confidence only a supportive family upbringing could foster – it’s easy to assume that theirs is a unique bond. Maggie accompanies Billie on her tours and interviews. Finneas collaborates on songwriting, while also performing with her live, whether on a festival stage in Singapore or in the studio for a radio special in Australia.

“He is really like my partner in making music. We give and take so well,” Billie says of their working relationship, which goes beyond the production. “There’s so much time wasted, working with people you don’t know, where if you don’t like something, you’re like: ‘You could, maybe, I don’t know, maybe try something where it’s a little different.’ Whereas, with Finneas it’s just like, ‘No, that sucks, let’s move on.’ We just know each other so we can do that.” What becomes apparent when talking to Billie, though, is just how much of an emotional toll fame at such a young age can have on a person, which is why this strong family unit feels so important. There are all of the hallmarks of a moody and rebellious teen in Billie’s dress sense and presentation but her understanding of what’s going on around her is surprisingly enlightened, however youthfully that’s articulated.

“Being famous sucks so much,” she says about the realities of being in the public eye. “It’s so gross I just said that but it’s like, only some people should want this, you know what mean? People are like, ‘I just want to be famous, that's all,’ and it’s like, ‘No, you don’t.’ Especially if you just want to be famous to be famous, that’s really pointless. The only thing that’s good about it, to me, is that I’m doing what I want and it’s become successful. That’s all I can say that is good. If you’re just going to be famous to be famous, that’s hell. The only reason I’m okay with doing all of this stuff and having it all happen is because I’m doing what I love.”

And do what she loves, Billie does. You can sense it in the breathy catharsis of ‘idontwannabeyouanymore’, and you can feel it in the brutal melancholy of ukulele-led number ‘party favour’, but that doesn’t mean it hasn’t come at a cost. “I don’t have friends anymore,” she says frankly, in response to the suggestion that her work and online celebrity must surely affect her relationships. “I don’t have time… I do have my brother, which is great, but it’s like, you know, ‘Yeah, well your ‘day ones’ always stay with you,’ and it’s like, ‘No, they don’t. They really don’t.’”

I don’t have friends anymore, I don't have time…

About halfway through our conversation, Billie can’t restrain herself any longer. Tired of inspecting the plastic pot of a strangely crumbly-looking vegan cream cheese condiment for her toasted bagel – that for much of the interview remains untouched – she finally removes her clear dental braces. “I have these horrible Invisaligns so I have to take them out and it’s really gross,” she says apologetically, while her veneer of proud indifference cracks when one of the plastic retainers slips out of her hands and falls under my feet.

It’s the same latent self-consciousness – buried under a moody teen exterior – that surfaces in brief glimpses when Billie talks about meeting Lana Del Rey for the first time. “Oh my god, that was insane…. Lana Del Rey is the sweetest human and she’s a fan of mine. I was, like, ‘What the fuck.’ It’s so weird. I was at this [American Society of Composers, Authors, and Publishers] awards event and she was just there, and my PR was like, ‘Lana’s here, do you wanna meet her?’ And I was like, ‘Mm-kay.’ So we walked over and I met her. I think she said I looked like a tangerine or something because I was wearing orange. She patted me on the head. It was very adorable. I wouldn’t let anyone else pat me on the head but it was her, so I was cool.” Billie counts Lana Del Rey as a major influence on her own work, citing her vocal delivery in something like ‘Off To The Races’ as a major inspiration. “That song is the fucking most badass song I've ever heard in my life,” she says before reciting its lyrics and laying out the vocal gymnastics – between high and low keys – that make it so exceptional. “The beginning is her in this really low, raspy voice and it’s like, “My old man is a bad man…” you know? It’s really low, and Lana Del Rey-low. Then the chorus is like, “And I’m off to the races…” and it’s this little baby voice. The fact that she can do that, and she does it a lot, is so interesting to me.”

It’s from here that our conversation segues into a recent vocal cord check-up at the doctors, and the habits that keep Billie’s exceptional, choir-trained voice in shape. “I don'’ know how to belt really low because my voice doesn’t do that. I sing really quiet, like a baby. I don’t really do anything that would hurt my voice and my voice is really quiet on its own. As you can see I can’t really talk very loud,” she says, before her mum volunteers a correction: “She’s very loud in the house… but she sings with very good technique.”