Crowd-Sauce: How Memes Are Helping Rappers Reach Number One

Memes aren’t a new phenomenon, In fact they’re older than the internet itself. The word was coined by Richard Dawkins in his 1976 book ‘The Selfish Gene’ and was intended to be used to describe human behaviours that spread though society by imitation. Whilst the term now refers specifically to internet jokes that are spread rapidly (and usually organically), the general principle remains the same.

The relationship of memes to popular music isn’t new either, you can look back to tracks like Baauer’s ‘Harlem Shake’ to see that. But what is new is memes driving not just a single song’s popularity, but also boosting the associated artist to stratospheric new heights.

Tracks like ‘Bad and Boujee’, ‘Black Beatles’ and ‘Mask Off’ all benefitted hugely from viral memes, and pushed the artists behind them (Migos, Rae Sremmurd and Future respectively) into the mainstream spotlight in a big way. Hip-hop and meme culture are interlinked, that much is clear, but how and why has this happened?

It would be impossible to talk about the topic without looking at the impact of Canadian megastar Drake. From ‘Wheelchair Drake’ way back in 2010 to the countless ‘Hotline Bling’ parodies a couple of years ago, The Toronto rapper has been the focus of so many memes that he has a page with multiple sections on the website Know Your Meme. Drake has been one of the most successful at using the meme to their advantage. During a feud with Meek Mill in 2015 - in which the Philly rapper revealed Drake was collaborating with other writers on his music - Drake employed the brilliantly petty tactic of running a slide show of crowd sourced Meek Mill memes behind him during his performance of diss track ‘Back To Back’ at his annual OVO Fest in Toronto.

During – and just before – Drake was weaponising memes for the first time, Future was discovering just how powerful a mobilised and internet savvy fanbase could be, courtesy of #Futurehive. #Futurehive was an internet fanbase formed in the wake of Future’s solid gold run of mixtapes – ‘Monster’, ‘Beast Mode’ and ‘56 Nights’, topped off with his third studio album ‘DS2’. The internet duly went wild at this relentless stream of high quality music, and soon there were even more Future memes than mixtapes, with the star’s face being photoshopped onto sports stars, music icons and even Jesus Christ.

These parallel meme movements combined with the release of Drake and Future’s joint project ‘WATTBA’ in September 2015, which spawned hundreds of duo-related memes and hit number one on the Billboard 200 album chart. At this point it’s worth mentioning that both Drake and Future had number one albums under their belt already, with ‘If You’re Reading This It’s Too Late’ and ‘DS2’ respectively, so the success of ‘WATTBA’ can’t be explained by memes alone. Having said this, there’s no doubt that this grassroots internet activity boosted both Drake and Future’s profile pre- release and raised excitement levels when the joint project was announced, giving sales a welcome boost on release.

Drake, Future and ‘WATTBA’ show artists using and generating meme attention, but when it comes to single tracks benefitting from the meme-as-music-promotion trend, Migos’ ‘Bad and Boujee’ is possibly the ultimate example. Migos originally found fame thanks to their track ‘Versace’ in 2013, which, helped along by a Drake remix, peaked at number 99 on the Billboard Hot 100. This base became the springboard for ‘Bad and Boujee’ in 2016, which was Migos’ first track to hit number one in the US. One of the key differences between the two tracks was that in the intervening years hip-hop memes had made it into the mainstream.

Riffs on the opening line “Raindrop, drop top” made their way around the internet at record speed – becoming so prevalent they merited their own Buzzfeed list - and with streaming figures counting towards chart positioning, every curious YouTube view brought the track further into the mainstream, and closer to number one. The track also featured the massive meme potential of Lil Uzi Vert opening his verse by screaming “YA YA YA YA YA”. Memes thrive off of the funny, catchy and bizarre, and Uzi managed to be all three at once.

There was a further surge in popularity after a bizarre interview from Complex’s daily news show ‘Everyday Struggle’ in June last year. The shows then hosts Joe Budden, DJ Akademiks and Nadeska Alexis, met the trip backstage at the BET Awards where they reportedly had difficulty with hearing one another amongst the hustle and bustle. This lead to an awkward exchange - which repeated three times - between Akademiks and Takeoff, the host asking why the rapper why he didn’t appear on ‘Bad and Boujee’ and the rapper responding “doesitlooklikeiwasleftoffbadandboujee?” A frustrated Joe Budden walks off set and then a near fight breaks out. Unsurprisingly, the clip went viral.

A few years ago, this kind of attention might not have translated into much. Sure, it would have raised the profile of the song, but this wouldn’t necessarily have translated into sales, chart positioning or a very long lifespan. Not only did this situation reignite interest in ‘Bad and Boujee’ but it also gave them the subject matter for a new track ‘Ice Tray’, which has them declaring Joe Budden a “pussy” on the hook and includes a video complete with actors depicting the ‘Everyday Struggle’ hosts.

The music world has changed dramatically in the past few years however, with streaming services and YouTube not just putting money in artists’ pockets, but also contributing to chart success. If somebody hears a track on a funny video, chances are they won’t rush out and buy said track, but if all they have to do is type the song name into Spotify, suddenly it’s a lot more likely they’ll bother.

From there the popularity spirals as more people hear the track, make their own memes and feed back into the cycle. Because anyone with access to a computer can make a meme they provide an access route for people to feel part of a culture in a way that hasn’t been open in the past. The cliquey nature of music fandom can often feel exclusionary and meme creation can be seen as a way around this, letting anyone riff on the hot topic of the day.

Trap and hip-hop have benefitted from this promotion most of all, in no small part because their listener base tends to skew towards the younger and more digitally active (hip-hop accounted for 24.5% of music consumed in 2017, but over 30% of audio streams ). Underground groups coalesce around certain artists - Young Thugga La Meme, a Young Thug fan page - has over 260 thousand members, to give just one example, and these groups soon develop in-jokes and memes. This, coupled with people’s desire to evangelise for artists they like, means that groups work as meme factories, amplifying an artist’s online presence and inducting new fans that want to ‘get the joke’ behind viral trends like the ‘Mask Off’ flute meme. This creation loop taps into the ultimate magic of memes, they make people listen in an era when attention spans are getting shorter and shorter. With infinite music at people’s fingertips they need a reason to check out a new song, above and beyond an advert or a recommendation. In short; it’s much easier to listen to what you know is good, or at least funny.

This does have a negative aspect to it however; with some fans only delving into hip-hop culture ironically to as a source of material to make jokes from, engaging with rappers as novelty acts. These temporary fans are harmful in the long-run, approaching the culture from a place of privilege and never getting to - or needing to - understand the true issues and messages behind the music. Either way, their engagement in hip-hop culture is altering the way the music is being marketed, the way it’s being made and, increasingly, which artists are being signed.

One example of this is Post Malone’s ‘rockstar’, which was helped to the number one spot by a now deleted video uploaded by his label Republic Records which simply looped the chorus of the song over and over again, for the exact length of the original track, cutting out all of the verses. The chorus was what people were riffing on, so the chorus is what Republic gave them. Cynical maybe, but it definitely worked - ‘rockstar’ topped the US charts for eight weeks straight.

Record companies have realised the potential of pushing an artist through simulating grassroots support, or piggybacking on support that already exists. We’re beginning to see more and more artists being signed off the back of memes, including the ‘Cash Me Outside’ girl, now known as Bhad Barbie, and Mason Ramsey, the Walmart yodelling kid, signing to Atlantic, and Big Shaq signing with Island Records. 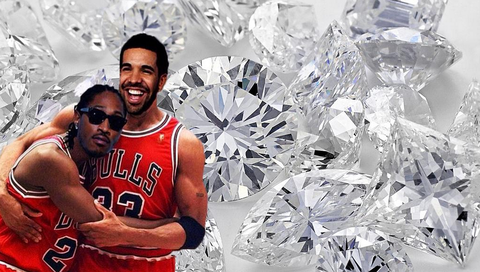 Up-and-coming rappers are leaning more heavily than ever on internet fame to propel them into the mainstream. Artists like Ugly God and Lil Pump have taken the concept and run with it. Ugly God happily refers to himself as a meme rapper, and when asked where his success comes from, he isn’t shy in saying it:

“Memes! The meme videos. Memes are life. Memes is the business. Memes is the Internet. It’s a lifestyle,” he told HipHopDX in early 2017. Hell, he even went viral for letting a lizard bite his nose.

While this seems like a positive new avenue for aspiring artists to travel down, it isn’t all sunshine: not every viral sensation can convert their five seconds of fame into a career. The internet moves on incredibly quickly and it’d be naïve to assume that going viral is a force that can be controlled. This links back in with the question of whether meme-makers are laughing with the acts they’re parodying or at them, a distinction that many artists may not realise until it’s too late.

The mass market intervention could kill the meme/hip-hop love-in that’s grown from a grass roots level, but it doesn’t show any sign of doing so yet: the impulse to make it look like Drake is playing tennis is just too strong to resist.