Cocoon Is A Celebration Of Lockdown Listening

In the never-changing days of lockdown three, music’s become more of a lifeline than ever. And for many of us, it’s felt like one of the only ways to escape our isolations — a route out of chaotic flatshares; a way to tune out parents or partners; a ticket back to happier times when pals, pints and music festivals in Barcelona were all potential cards on the table.

Playlists made for every mood, payday vinyl or Friday night dj sets streamed as you rave round your telly with a couple of gins - whatever format’s your favoured, escaping through music has felt like a genuine means of spiritual survival.

What records have been helping you through it? That was the question posed by Alexander Smail, editor of Edinburgh-based project Cocoon, for this collection of essays exploring the act of lockdown listening. Born out of 2020 frustration, Cocoon’s on its second edition already. 50% of its profits will be donated to We Belong, a charity set up for (and by) young people who’ve migrated to the UK. Its first, released last summer, gave proceeds to Scottish Women’s Aid and The Black Curriculum.

As before, it’s a family affair —with brother Jamie on design and sister Katy on the artwork accompanying every piece. But this follow-up, centred on the soul-sucking days of latter lockdowns, is a more layered, sedate kind of mixtape.

Essays detail the recovery of forgotten sexiness; the sacred retreat of favourites hidden from streaming platforms; the life-affirming splash of a paddle on the beach. Writers from Dazed, Crack, gal-dem, Pitchfork and Gold Flake Paint take the page to remind us that even if we keep our epiphanies between our souls and our earbuds, music connects us to a community of listeners. Reinforcing that in our moments of shared joy or private revelation, with the records we love we’re truly never alone.

Alex talks us through how it all came about. When did the idea for Cocoon come to you?

Last March, when COVID was still such a huge question-mark. Everything felt particularly apocalyptic back then, and I just wanted to bury myself in work, to pretend none of it was happening. But being a freelance arts journalist, that wasn’t really an option for me.

Every publication was either ignoring or rejecting my pitches. It got to a point where I realised I needed to self-publish if I wanted to actually do something productive. Around that time, I was putting together a portfolio for my journalism master’s and needed a larger-scale project. Essays about the music people were listening to in lockdown felt like a natural direction to go in.

After we released last summer, the whole thing kind of snowballed. It went from being this little zine that I thought a few of my friends would buy, to raising over £1200 for charity and being stocked in shops across the country.

I think the concept of reading about the music that’s been helping others through these horrible times really resonated with people. I never considered doing a second one after I’d wrapped it up, but I had no idea things would still be this bad a year on.

I’m still a struggling freelancer. Looking back, Cocoon is really the only thing I’ve ever made that I’ve actually been proud of. It made sense to bring it back, if only to give myself a purpose for a while. I’m so happy I did though. Doing the first one gave us confidence to be a bit bolder, and I’m really happy with how it all turned out.

What albums, other than the one you’ve written about, got you through?

I’ve been trying to get back into listening to full albums rather than just playlists. I’m definitely listening to more acoustic, folky music than I did before. My favourites at the moment are albums I can wallow in, like 'Sea Change' by Beck and 'Bad Bonez' by Michael Seyer. These days, I need to be consuming media to fall asleep, which I never did before the pandemic.

I try to listen to music rather than watch TV or stare at my phone, and Windswept Adan by Ichiko Aoba is almost ASMR like - so it’s perfect for that. On the rare days where I don’t feel so pessimistic about where things are headed, I gravitate towards the kind of music I tended to listen to pre-lockdown, so things like house and pop. Róisín Machine by Róisín Murphy and Outer Peace by Toro y Moi always put me in a good mood.

How did you select the essays?

The way I put together the essays was totally different this time around. For the first, since I didn’t really know what I was doing or what it was going to be, I put out a call on Twitter asking if any music writers would be interested in contributing to a lockdown project. I lucked out with the people who got back to me, and almost everyone who did ended up being in the mag.

On Cocoon 2, I wanted to do things a bit differently. I wanted to fully step into the role of editor. Instead of sending out a call for contributors, I put together a list of writers I really admired and wanted to work with. It was a long list, around 50 names, because I assumed the people I asked first wouldn’t be interested.

Amazingly, pretty much everybody got back to me saying they were keen. I’ve reduced the number of essays from thirty to twenty, so I wasn’t able to work with everyone I wanted but I think it was for the best, because it gave me the opportunity to really work with each writer on their essay - which I didn’t have time to do the first time around. A smaller number of essays also meant they could all be illustrated, which wasn’t the case with the original. 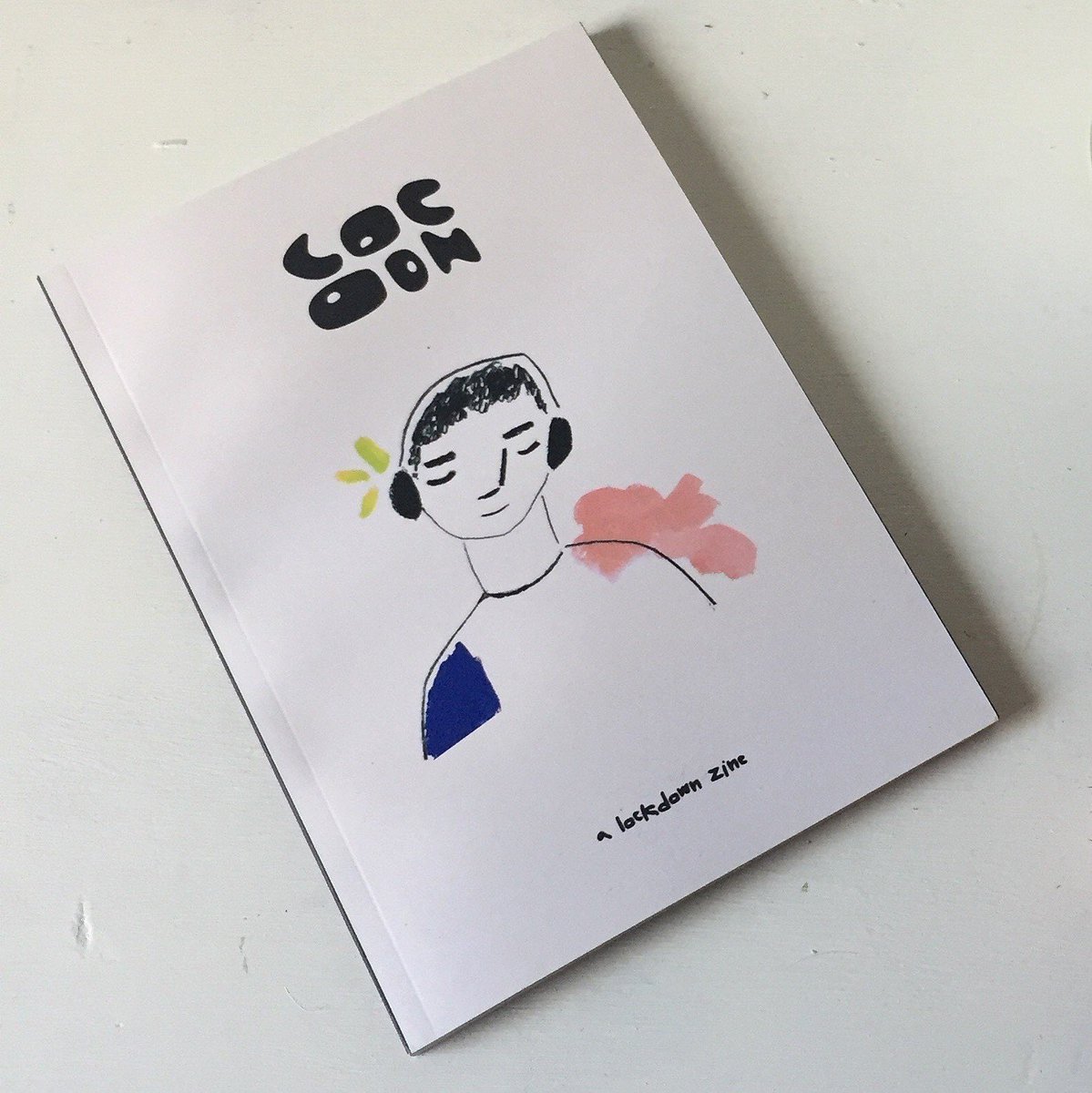 Since that early summer collection, in the (comparatively) light-hearted days of lockdown one, we’ve lived through a lot. Is there a change in mood?

That’s a really good question. Yeah, I think there is. There’s definitely an anger, primarily towards the government, that wasn’t present in the first collection. The element of escapism has been pushed further this time, too. Many of the essays in the first collection spoke about nostalgia for pre-lockdown, this time a lot of the writers talk about the albums they used to listen to as kids.

As lockdown has dragged on and on, we’ve all become increasingly desperate to go back to a time when everything didn’t seem so messed up. I guess it’s not surprising that people have returned to albums that made them happy when they were young.

Cocoon’s been a tight-run family project, with your brother Jamie on design and your sister Katy on illustration duties. What was it like to work with family and feel together, even if you were apart? I’m really lucky that both my brother and sister are very talented artists, because I wouldn’t have even considered taking on such a big project if I didn’t have their support. It was really nice to be able to collaborate and each bring something to the project. Without Jamie and Katy, Cocoon absolutely wouldn’t exist.

For the first mag, me and my brother were both at home while my sister was living down in London, so it helped the three of us keep in touch and busy in those early months. Since then, she’s since moved back home too, so it’s been a much more streamlined process. Rather than having to email back and forth, I can pop into the garage that she’s turned into a studio and speak to her about anything.

Can you tell us a little more about the radio show you’re running on EHFM?

When the first Cocoon came out, I had the idea to turn it into a podcast because I thought the concept really lent itself well to that. I guess I got distracted by other things and it never quite came together. It wasn’t until the end of last year, when I started volunteering at EHFM, a community radio station based out of Edinburgh, that the idea came back into focus.

I’ll play around 30 minutes of music that I’ve been listening to in lockdown and then interview somebody about a particular album that’s been helping them through the pandemic.

To be honest, I’m still working it out as I go along. The team at EHFM have been really supportive and patient with me finding my feet though, and I feel incredibly lucky that Cocoon Radio has found a home there.

“My first lockdown re-listen of Metronomy’s 'The English Riviera' was on a freezing and cloudy September morning at the Rustington seafront—a small and slightly desolate village in West Sussex. My mate Gaby took us here because we both desperately needed to get away from our confined London homes. I had the urge to play this album after going for a refreshing swim one day, while Gabs stayed inside and made us breakfast. The sky was serious, grey with threads of purple running through it. The tinny sound of ‘We Broke Free’ barely reached me as the muddy waves crashed near my feet.”

“My father banning me from watching MTV Base at the tender age of seven for shaking my derrière to Beyoncé in our family picture-adorned front room only set the precedent for my taste. The future hottie was simply brewing and, as expected, his surprise has since been replaced by pride. Riding the anxiety train of adolescence and early adulting to 23 has made reaching back out to that blithe flygirl alter ego a challenge, one that I struggle to muster now that the pandemic has killed off clubbing. That was, until Bree Runway’s '2000AND4EVA'.”

“Despite its obvious melancholic tone and subject matter, Nick Drake’s debut album 'Five Leaves Left' became a comforting companion throughout the various lockdowns. Perhaps it was the record’s warm pedal notes lulling me into a daydream where I’d momentarily forget the world’s chaos. Perhaps it was Drake’s traditional folk singing, its roots digging into the ground I traversed on daily walks through the Oxfordshire countryside. Or maybe it was the flutes fluttering with the birdsong outside, or the closeness of the sound of Drake’s fingers scraping strings, as if the figure of him performing was immortalised inside my own home.”