Scott Hutchison was - without question - one of the most adept, literate, caustic, and downright funny lyricists of his generation.

Able to move from the crude to the heartbreaking in the same line, Scott caused you to look at the world in a different light, providing you with the lexicon to explore your own experiences in the process.

Propelling Frightened Rabbit from tiny shows in Glasgow to the UK Top Ten albums chart, his work touched countless lives around the world, enhanced by their whisky-fuelled live shows.

Sadly we lost Scott in 2018, but his songwriting catalogue is remembered in print this year through the publication of The Work, a truly beautiful hardback collection that features his Frightened Rabbit lyrics.

Stretching across five studio albums - alongside EPs and deep cuts - it's a formidable offering, complete with sketches and illustration from Scott's own notebooks.

Out now, The Work is a must-have addition to any fan's bookshelf, and represents an incisive introduction into Scott Hutchison's universe.

To celebrate its publication, Clash spoke to a number of songwriters about their own love for Frightened Rabbit, with each highlighting a lyric that means a great deal to them. 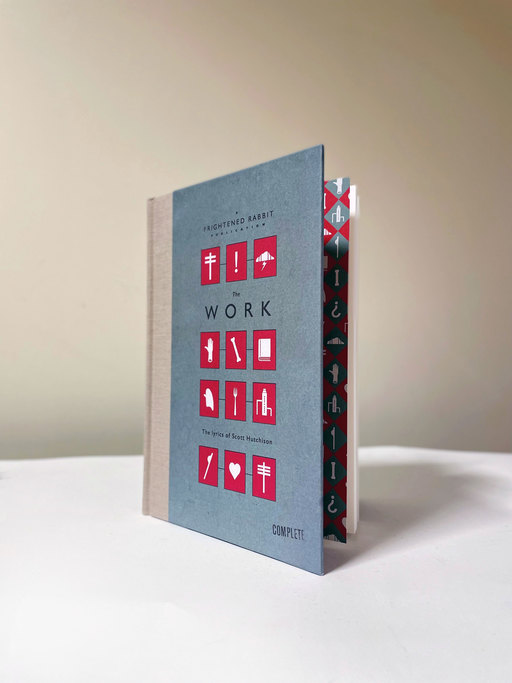 When Scott and the band were working on what became ‘Pedestrian Verse’, we were in the habit of sending each other rough mixes and demos of our work and comparing notes, bouncing ideas, or just gently encouraging each other. It was lovely to be able to connect with another songwriter (and one I so admired) in that way, but it was occasionally galling.

One day Scott sent me some rushes of the mixes for their new work, and I excitedly sat down in some forlorn hotel room to listen through to them one evening. When the tracklisting rolled around to ‘Nitrous Gas’, the world stopped for me. The arrangement was so stark – lush, choral, but somehow bleak and empty at the same time. The lyrics were staggering to me, and still are. They perfectly encapsulated Scott's gift for saying the things we usually leave unsaid, crystallising our deepest fears and insecurities, but always with something of a wry smile, a dash of Scottish humour.

I paused the playback and got my phone out to call him and protest: “For God's sake, leave something for the rest of us!” Scott chuckled warmly and took the recursive compliment as well as a songwriter ever does. To this day the song stands as a monument to his talent and his voice. It's streaked with yet more sadness, given how things ended, but, like all the best songs, its truth is as clear and resounding as a bell on every listen.

‘Backyard Skulls’ (As picked by Fatherson)

It’s an incredible and difficult task to pick your favourite frightened rabbit lyric. Scott had a way of opening up the tiniest crack in your heart and pouring some light in, or the kind of sarcasm that would leave you smiling like someone had just stolen the punchline to your best joke. I always thought ‘Backyard Skulls’ was like that. It’s a powerful examination of the human condition.

A song about making mistakes whilst growing up that will stay buried just beneath the surface in your mind. A reminder to learn from past experiences and not let them shape your future. And the fact that it’s all in your own garden because it’s the things you move around with you is genius. Clever, sincere and just class. It’s hard to pick one because it changes all the time but today it’s ’Backyard Skulls’.

‘Acts Of Man’ (As picked by Craig Finn)

In the days following Scott Hutchison’s death, I spent a lot of my days listening to the Frightened Rabbit catalogue. The songs all sounded a bit different in this new light, and in my grief I discovered things I hadn’t noticed before. Now, the lyrics seemed to lay out his struggles in often direct terms.

Although I was terribly sad the songs that Scott left us with helped me to process my grief. The album that I kept coming back to was Pedestrian Verse, released in 2013, which opens with the stunning ‘Acts Of Man’. The first line “I am the dickhead in the kitchen giving wine to your best girl’s glass” made me laugh out loud the first time I heard it. Scott’s lyrics were often like that, funny but tragic too. What strikes me now is how he implicates himself right out of the gate. He is not looking down on the people studied in the song, he is a part of it, one of them. A dickhead.

The next verse is such a vivid portrait that it makes me a bit uncomfortable: “Oh I see the stumbling pinstripe trouser/The flecks of sick on an office shoe/Part of the fatty British average/That lives in the houses around you”. Again, these words put him and us in the middle of the subject, rather than above it. Having too many drinks after work, unplanned- it happens. Somehow by pointing out this fact, I feel like Scott is letting us forgive ourselves for our sins, free ourselves from the shame, and acknowledging how we all fail at times.

The rest of the song details the sins that are part of our modern lives, mating rituals, love, parenthood, and more. He has an incredible eye, detailing “stocky fingers” and “a knight in shitty armour” and a cast of anti-heroes. And when he comes to the chorus, he starts out observing that “Heroic Acts of Man” are “not here”, as they don’t exist among these lives.

But later, the song pays off and the whole thing shifts. Scott says “I’m here, I’m here. Not heroic but I try”. I read this as the idea that just moving forward is an act of bravery for many, and heroism can come in small motions. It’s a beautiful thought and something I’ve tried to remember, especially after his passing.

Scott Hutchison sang sad songs, but when we all got together at a Frightened Rabbit show, we raised our glasses and sang along and somehow felt better. In those moments I felt an admission that we all struggle, we all have hard times, and it’s part of being human. And to celebrate that fact in a crowd of people often felt triumphant. ‘Acts Of Man ‘is incredibly honest and empathetic and ultimately a testament to a one-of-a-kind songwriter.

“Oh, I don’t know these buildings I think I’m lost"

It’s probably about Glasgow, but it could be anywhere. Somewhere between blackout drunk and hazy morning recollections of the night before, the feeling of your home city being completely alien - an unwelcome wasteland.

Combined with social anxiety, it’s a theme Scott revisited later with ‘Los Angeles Be Kind’, a struggle to feel at home in the place you’ve chosen to live, loneliness despite being surrounded by people.

'My Backwards Walk' (As picked by Grant Hutchison, Frightened Rabbit)

"You're the shit and I'm knee deep in it"

This is just absolute genius. Scott's writing is so visceral and visual and this is the perfect example of that. You know exactly what he means and how he feels and he brings that little wry sense of humour in there too.

I will always remember the pause right before this kicks in when we would play it live too. You could almost hear the whole room inhaling together to belt this out as loud as they possibly could at the stars on the ceiling.

‘Poke’ (As picked by Hamish Hawk)

I was seventeen in April, 2008. It was my second to last year of high school. I had a girlfriend I was obsessed with, a wide circle of friends whose parents were lenient enough to offer up their flats for parties, and a growing tolerance for supermarket own-brand vodka. In Scotland at the time, there was one band and one album. The band was Frightened Rabbit, and the album was ‘The Midnight Organ Fight’.

It’s difficult to put into words exactly what that album meant to us. It became a part of us, and we couldn’t help but feel that we became a part of it, too. We were so happy to hear ourselves in the music, to be represented by it, and to know that it had been made by a few guys down the road who had been raised under the same cloudy skies as we had. We would scream every one of those songs at the top of our lungs.

I could choose any lyric of Scott’s and be happy to have it stand as my favourite, but the above from ‘Poke’ gets me every single time. There’s an unerring warmth and humility that shines out from Scott’s lyrics and delivery, beside a deep well of compassion and a yearning for intimacy. His is exquisite gutter poetry in a soft Scots brogue, and to this day, he lives on in reels at Hogmanay, in dreich walks home in the pissing rain. He was an absolute treasure, and I’m so hugely grateful to him, and to Frightened Rabbit, for everything they’ve done for me.

‘The Oil Slick’ (As picked by Julien Baker)

When the first sliding legato guitars of ‘The Oil Slick’ by Frightened Rabbit come bouncing from the speakers, I am in my friend Brian's sedan, we are carpooling to a concert in Nashville, it is 2018. The National are playing a show at the Ryman, Frabbit is opening, and I don't know yet that I love this band. It's an interesting first introduction, the last track of their 2013 record ‘Pedestrian Verse’. The song is playful, almost. Its first lines, delivered in Scott's gentle melodic canter, read like a folk song or pastoral love poem:

I went looking for a song for you, something soft and patient to reflect its muse

It's sweet. But by the end of the second couplet, the weather has changed, the narrator's aspirationally bright thoughts have gone. Still, he's resolute to find the limit of darkness. “Took the ocean, in a boat this time,” he says, because he's done this before, warning, “only an idiot would swim through the shit I write”. It's crude, and this makes me want to read it as funny, which it could be, but it feels like the crassness of the joke is diffusing a bitterness. Our speaker returns un-heroic, his trouble yielding nothing, his loathing having been reinforced by his failure.

How predictable this is all you've got
Just another selfish signpost to my ruin of faults.

The defeat is familiar, inescapable. But it is not the punishment of the universe or an indifferent whim of fate. This distress has been pulled up from the gut, it's the waste the speaker ejects: bile, tar on new feathers. It's something intrinsic to the self, expected but nonetheless disappointing, and when Hutchison tells us about this darkness he's constantly, regretfully expelling - the dark words pissing from [his] throat - he bites the word "piss" spitefully out of the air.

In the four lines of the song's final refrain though, that humour that made space to reveal the depth of hurt returns - now it is a caveat, something that lends deniability to the foolishness of hoping. The song relents with a wry but truthful affirmation; the hope we feel a mysterious need to preserve can be can be real or unreal, absurd or probable, it doesn't matter. Its retelling is a tongue we use to nurse the wound of existence, the light we crawl towards out of a dirty tunnel, the love we make of misery's constant companionship, and this is (or, for now, will have to be) enough.

The Work is out now, grab your copy HERE.